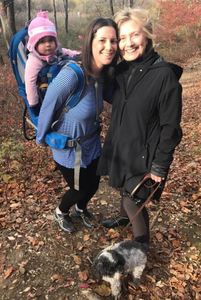 Westchester resident Margot Gerster wrote on Facebook that she was feeling “heartbroken” after learning Hillary Clinton had lost the presidential election. To clear her head and gain some solace, she decided to take a hike on November 9. Margot headed to her favorite trial in Chappaqua, her daughter strapped to her back. "It was beautiful and relaxing," Margot wrote.

She added, “As we were leaving, I heard a bit of rustling coming towards me and as I stepped into the clearing there she was, Hillary Clinton and Bill with their dogs doing exactly the same thing as I was.”

Margot hugged Hillary and told her that one of her most proudest moments as a mother was taking her daughter with her as she cast her vote.

"She hugged me and thanked me and we exchanged some sweet pleasantries and then I let them continue on their walk," Margot explained.