A Place of Kindness- Ben's Bells 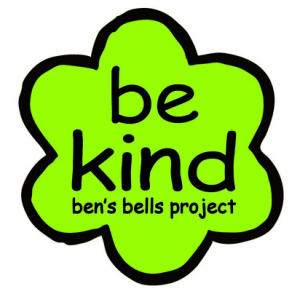 The organization Ben’s Bells came to Newtown after the shooting at Sandy Hook Elementary School to give the community hope and spread the message of being kind. Now with a permanent location in town their impact continues to make a positive difference in the community.

The Ben’s Bells Project is a non-profit organization that originated in 2003 after founder and executive director Jeannette Maré’s youngest son, Ben, passed away. Her son was nearly three years old, and it was a devastating loss for Maré.

During that difficult time, people reached out to her and offered ways of kindness as support. What she found was that those acts, no matter how small, comforted her during her grieving.

Maré took that as inspiration and began making ceramic Ben’s Bells as a way to honor her son and spread kindness to others.

What started as a therapeutic project in her backyard, turned into two studio locations in her community of Tuscan, Ariz.

Today, the organization’s motto of “Be Kind” has spread across the country.

A few days after the shooting at Sandy Hook Elementary School on December 14, 2012 (12/14), the Ben’s Bells Project received many people contacting them requesting their bells be brought to Newtown.

Jennifer Avari, a resident of Newtown since 2002, had been in contact with the organization during that time.

In January of 2012, she had visited Arizona and learned about the Ben’s Bells Project after participating in an event making the bells.

“I found out about their free school program at that time. I brought back a sticker, ornament and 10 kind coins to my daughter’s school, Middle Gate Elementary. The principal allowed my daughter’s class to test out the Kind Campus program with the kindness coins,” said Avari.

So, when the organization wanted to get 1,000 bells to Newtown they sent them to Avari’s house. They also flew out six representatives from the main Ben’s Bells Project.

The bells were distributed all over Connecticut and hung in public places where people could discover them.

"People seemed to be so happy to find the bells and to participate in the message of Ben’s Bells,” said Avari.

“The stories of people finding the bells were overwhelming, knowing that there are others out there that are spreading kindness to all of us.”

In February of 2013, Maré and Avari worked together to create the Newtown chapter of the Ben’s Bells Project.

Avari became a Lead Volunteer along with two other local moms from the Newtown area, Jodie Adolfson and Beth Krueger.

During the beginning stages of setting up the Ben’s Bells chapter in Newtown, the three moms handled numerous responsibilities like purchasing the clay, firing the pieces, stringing the beads and hanging the Ben’s Bells when they were completed.

Their job also included organizing bell workshops that would have 100-150 people attending.

With no permanent building at the time, Avari said they held their “large sessions in local locations like Healing Newtown and Wesley Methodist Church.”

By July of that same year, Ben’s Bells Newtown moved into their donated studio location on 17 Church Hill Road.

The studio offers those who want to give back to the community a chance to sculpt clay or paint beads that will be turned into a Ben’s Bells.

Avari described the location as a “healing place.”

“It’s amazing how therapeutic it is to play with clay. You really feel like you are part of a community spreading kindness to others.”

“The original Ben’s Bells cannot be purchased. The idea is that the kindness of Ben’s Bells is meant for everyone, not just those that can afford to purchase a bell,” said Avari.

To date, there have been 4,046 Ben’s Bells created from the Newtown chapter and hung in the Connecticut and NY area.

Ben’s Bells does offer a variety of products for purchase, including kindness coins that can be given out as small, individual tokens that spread the group’s message of intentional kindness. Since 2013, the Newtown chapter has sold about 20,000 kindness coins.

“We’ve had so many people support the organization over the last two years, not just on the anniversary [of 12/14] but throughout the year,” said Avari.

“I think the organization has given people some hope and direction to place positive energy.”

After 12/14, Ben’s Bells in Arizona helped the Newtown community heal. Now today, having a Connecticut chapter allows residents to participate in making bells that will bring kindness to others who need it.