Bethel's Byrds Books Wages Battle of the Books on Dec 13 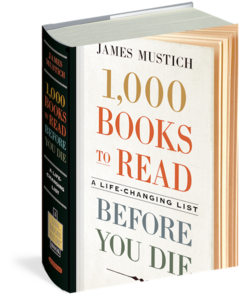 Would you go to "battle" in defense of a favorite book? On Friday, December 13th, 7:00pm to 9:00pm, well-read warriors will do just that as Bethel's Byrd's Books brings together five passionate readers to make a case for a book they think should be on everyone's "To Be Read" list.

Inspired by "1000 Books to Read Before You Die: A Life-changing List," written by Connecticut bookseller, editor, and writer, James Mustich, volume II of "Battle of the Books," presented before you - the voting audience, promises plenty of surprises. The five people and their choices of books are secret, for now! Byrd's Books is located at 178 Greenwich Avenue, adjacent to The Toy Store and the nearby landmarked Opera House, across the street from the Bethel Public Library.

At the end of the “battle,” the audience votes for the book they most want to read or reread, a winner and runner-up are declared, and copies of "1,000 Books to Read Before You Die" and all five books on the program will be offered for sale. Wine and cheese will be served. The event will fill up quickly, so to reserve your vote, go to https://conta.cc/33kbCTg

"1000 Books to Read Before You Die" was named one of the 50 best nonfiction books of 2018 by the Washington Post. In 2007, Mustich was the founding editor of the Barnes & Noble Review, an online literary journal, and In 2017, Mustich became the founding executive producer of the Barnes & Noble Podcast. As editor of the Review, he has enjoyed interviews with such leading authors as Philip Roth and Salman Rushdie. Earlier this fall, Iona College invited the nationally renowned visionary editor to join the college as an Executive-in-Residence.

Byrd's Books' holiday catalog, providing easy shopping by category, is now available on line by visiting ByrdsBooks.com  Beginning Thanksgiving, holiday hours at Byrd's Books are Monday, Tuesday, Wednesday, Friday, and Saturday, 10:00am to 6:00pm, Thursday, 10:00am to 8:00pm.  On-street parking lines Greenwood Avenue, and municipal parking is available at the Bethel Public Library across the street and at the "Old Train Station" which is where Broken Symmetry now resides. There are private lots nearby as well. For more information, visit ByrdsBooks.com or call (203) 730 BYRD (2973).