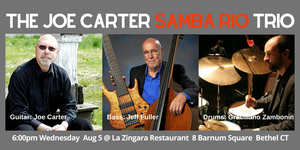 The Joe Carter Samba Rio Trio celebrates the music of Brazil – Samba, Bossa Nova, Choro, Baiao and more. Their repertoire features songs by Brazil’s classic composers such as Antonio Carlos Jobim, Moacir Santos, Jacob do Bandolim, Luiz Bonfa, Pixinguinha, Baden Powell, Ary Barroso and others. The Trio takes things a step further by using their Jazz backgrounds to add Jazz improvisation into the tunes, creating a sound that blends the best of both worlds. In other words: the best of Music from “Both Sides of the Equator”.

Joe Carter - Guitar. Having performed in such diverse places as Rio de Janeiro, Curitiba and Recife in Brazil, Bombay, Bangalore and Goa in India, Trossingen and Stuttgart in Germany and Paris and Corsica in France, Joe Carter has used these experiences to form a sound and style based in “Samba Jazz”, a style that combines the improvisational nature of North American Jazz with the lyrical and rhythmical aspects of Brazilian Bossa Nova, Samba, Choro, Baiao and MPB. Joe Carter has recorded and performed with Jazz artists such Art Farmer, Lee Konitz, Cecil Payne, Rufus Reid and others and with Brazilian artists such as Luiz Eca, Mauricio Einhorn, Robertinho Silva, Paulo Russo and others. In addition, he has recorded several CDs through the years, his most recent is Both Sides of the Equator, with bassist David Finck and percussionist Ze Mauricio. Joe Carter is currently the Director of the Academic Music Program at Sacred Heart University in Fairfield, CT, where he teaches The History of Jazz, The Music of Latin America and directs the Jazz Ensemble.

Jeff Fuller - Bass. Jeff has toured worldwide and recorded with saxophonists Lou Donaldson and Paquito D'Rivera. He has played with jazz masters from all styles and eras including Dizzy Gillespie, Mose Allison, Papa Jo Jones, Gerry Mulligan, and Clark Terry. Fuller is among the most sought after jazz bassists in Connecticut.

Graciliano Zambonin -Drummer. Graciliano is a Brazilian drummer and composer, who has settled in New York, contributing to the rich jazz-Brazilian percussion scene. He has recorded over 30 Albums.

Safe Social Distancing Seating With Very Limited Ticket Availability. Tickets Are Sold By The Table ONLY.