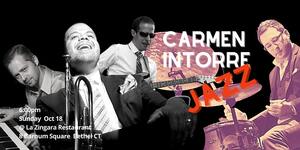 Safe Social Distancing Seating With Very Limited Ticket Availability. Tickets Are Sold By The Table ONLY. Tables Of 2, 4, and 6 are available. See The Attached Seating Chart. Five Indoor Tables With Open French Doors Facing The Performance And Eight Outdoor Tables Are Available. Raindate will be announced for a Wednesday in mid-October.

A 2011 GRAMMY® nominee for his co-producer credit on the critically acclaimed album by Joey DeFrancesco entitled Never Can Say Goodbye: The Music of Michael Jackson, Intorre also had the pleasure of performing alongside DeFrancesco and Dr. Lonnie Smith on the PBS show Legends of Jazz, hosted by Ramsey Lewis.

Receiving both his BM and MM degrees from Juilliard Intorre is always eager to uncover the latest information about music and drumming and to share that information with others. He states, "This is my job. I have to give back what I was given a chance to do." He goes on to explain, "Music is an opportunity for me to give up my soul, while in the process connecting with the audiences' souls as well. I want the musicians on the bandstand and the members of the audience to feel uplifted after a performance, to feel great about themselves through the experience that they encountered.”

Perhaps one word best describes Carmen Intorre and his music: Joy. Reminiscent of Billy Higgins, Intorre brings a palpable swing and drive to virtually every bandstand he performs on.

Jazz trumpeter and singer Jumaane Smith trained at the Juilliard School of Music 2001-2005 with Wynton Marsalis as his primary teacher. Jumaane's credits include performances on 5 Grammy Award-winning albums, an Emmy Award nomination, performances at The White House, on the Grammy Awards with Stevie Wonder, on the Today Show, Tonight Show, The Oprah Show, Good Morning America, and American Idol. Albums featuring Jumaane have sold more than 40 million copies. Jumaane has also collaborated with Quincy Jones, and Herbie Hancock, Aretha Franklin, and many others. Since 2005 Jumaane has toured and recorded extensively with Michael Bublé and currently performs with Harry Connick Jr.’s band on the syndicated daytime TV show "Harry". In 2013 Smith toured as guest soloist for Jackie Evancho’s, “Songs of the Silver Screen” world tour.

As a composer, Smith has scored music for the films, “Handsome Harry” and “Being In The World”. Jumaane released his critically acclaimed debut album, "I Only Have Eyes For You" in 2014, features special guests Michael Bublé, Jackie Evancho, and Naturally 7.

"Jumaane is a very special artist, a guy who is managing to be a unique and irresistibly creative voice at a time when most players are simply trying to imitate their favorite…” Don Heckman (LA Times, Downbeat Magazine)

“A terrific and prodigious trumpeter.” - Will Friedwald (Wall Street Journal)

Pat Bianchi, Grammy-nominated organist, winner of Downbeat Magazine’s 2016 rising star poll, and Hot House magazine’s 2019 poll, Pat Bianchi has established himself as one of the premier organists on the international scene today. His command of the instrument, harmonic prowess, rhythmic intensity, and versatility are rivaled by few. Bianchi has had the honor of being a long-time member of the jazz guitar icon, Pat Martino’s trio, and also performed with NEA Jazz Master and saxophone legend, LouDonaldson’s quartet for a number of years as well.

Born in Rochester New York, Bianchi comes from a musically gifted family. He began playing the organ at the age of 7 and was playing his first professional gigs by the age of 11. While in grade school, he enrolled in The Eastman School of Music’s preparatory program for piano and music theory while at the same time being mentored by numerous musicians in the Rochester music scene. Bianchi continued his studies at Berklee College of Music (Boston, MA) and is now a member of the faculty at this prestigious college.

While having the honor to perform with such greats as: Red Holloway, Terell Stafford, Peter Bernstein, Chuck Loeb, Dakota Staton, RalphPeterson, Tim Warfield, George Benson, and many others, Bianchi has released six CD's as a leader and is also a featured artist on over 30recordings. His newest release, "In The Moment” rose to #1 on the Jazz Week Radio Charts and features an array of guests including PatMartino, Kevin Mahogany, Joe Locke, Peter Bernstein, Paul Bollenback, Byron Landham, Carmen Intorre, Jr.

"For me, sharing love through music, and seeing the joy in people's faces when they hear the sounds, is why I'm passionate about what I do." - David Rosenthal

Tickets Are Sold By The Table
Table / Seating Chart