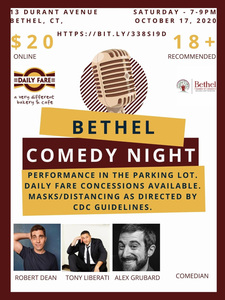 Stand-up comedy outside in the parking lot of the Bethel Train Station tomorrow, Saturday, Oct. 17 from 7 to 9 pm - presented by the Chamber of Commerce

Buy Tickets Here! No tickets will be sold at the door

Stand-up comedy comes to Bethel! Comedians from New York, New Jersey, and Connecticut perform live on stage in the parking lot of the Bethel Train Station and Daily Fare on Saturday October 17th at 7pm.

The Bethel Chamber of Commerce present a night of laughter and outdoor entertainment on Saturday October 17th at 7pm. Tickets are just $20 per person. Daily Fare concessions will be available before and during the event.

Mask wearing and social distancing is required according to the CDC guidelines. It is recommended that attendees bring lawn chairs or other seating in order to properly socially distance six feet apart from other parties. Please respect others' space and remain with your own party as much as possible.

Tickets are limited! There will be no tickets sold at the door. Only ticket holders will be admitted. Please join us for the first ever comedy show in the parking lot of Daily Fare and Bethel Train Station.

Alex Grubard has been performing stand-up comedy throughout the country since he was a teenager. He has performed sketch comedy on Comedy Central and CollegeHumor, stand-up on mtvU, and heard on SiriusXM. He is creator and host of the live game show Weeding Out The Stoned, which has been featured in USA Today, BrooklynVegan, Philadelphia Inquirer, and sold out venues across country. He regularly works at premier comedy clubs all over including Helium, Punch Line, Bananas, and Wisecrackers.

Tony Liberati delivers energetic and charismatic observational humor that connects with all audiences. His experience as an elementary school teacher blends a unique feeling of nostalgia and silliness. Tony has been on ABC’s America’s Funniest People and his jokes have been published in "The Idiot’s Guide to Joke Telling." Tony has opened for Gilbert Gottfried, Artie Lange, Ben Bailey, and more at comedy clubs such as Carolines on Broadway, Broadway Comedy Club, and Ridgefield Playhouse.

Jordan Jensen has recently been featured at the Just For Laughs as 2019 New Face. Before moving to Brooklyn Jordan lived in Nashville where she worked with Zanies Comedy Club and had the privilege of featuring for established comedians such as Nate Bargatze, Kyle Kinane and Jen Kirkman. She has been featured on SIrius XM and has participated in the Memphis, Nashville, Asheville and Orlando Comedy festivals. Her comedy is comprised of stories of her lesbian mothers, her pot head father and her promiscuous sister and how they shaped her into the rugged, romantically impaired, sexually clueless person she is proud to be today.

Robert Dean, originally from Bridgeport, was named a "New Face" at Just For Laughs Comedy Festival in Montreal in 2018, and is the subject of “Inside Jokes,” a Documentary Series available now on Amazon Prime. He has been a Comedy Central “Comic to Watch” and recently released his first stand-up album (It's Not Easy) Being Dean. Robert has been featured on AXS TV’s Gotham Comedy Live, WNYC's 2 Dope Queens podcast, and on Nick Vatterott’s Comedy Central Half Hour as Sexy Abraham Lincoln Lobster Man (a costume on display in the Robert Dean Museum).

Buy Tickets Here! No tickets will be sold at the door