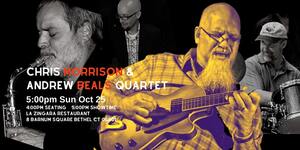 Andrew Beals has appeared as a leader of his own band and as a featured soloist with Jack McDuff, and others, at many renowned Jazz clubs and festivals (see attached). Beals was a semifinalist at the 1993 Thelonious Monk Jazz Saxophone Competition; and in 1998 he was awarded the prestigious NYU Jazz Orchestra Scholarship for graduate studies in Jazz performance and composition. He received his Bachelor of Arts Music degree at Livingston College, Rutgers University, and has a Master of Arts Music degree from New York University. His teachers were Paul Jeffery, John Stubbelfield, Frank Foster, George Garzone (saxophone) and Jim McNeely (composition) and National Endowment for the Arts (NEA) Jazz Master George Coleman (saxophone)

Christopher Morrison began his performing career in his teens with New Haven, CT jazz organists Richard McCrae, Bobby Buster and Eddie Buster. He has recorded and or performed with Adam Nussbaum, Lew Soloff, Joe Beck, Bennie Wallace, Harvie S, and John Stowell. Most recently he has appeared with the legendary guitarist, Joe Diorio, as his guitar duo partner.

Chris's latest recording, with saxophonist Andrew Beals entitled "Maybe Someday", is on the Centaur record label. Dr. Ken Ciuffreda of Just Jazz Guitar magazine wrote, "Chris produces one of the most beautiful sounds I have ever heard coaxed out of a jazz guitar - great phrasing, perfect musicality, warmth and expression - all played effortlessly with seemingly unlimited technique."He has earned several awards for his teaching including a Distinguished Adjunct Appreciation Award and a Centennial Award for Excellence from Western Connecticut State University.

Joe Strasser Drummer / Percussionist, is a native son of Bethel, CT. He is a "one of a kind stylist", with his own take on jazz drumming... his own sound. A colorist, who is mindful of the effect of each stroke on the musicians around him as a whole, Strasser mines the rest of the components of the drum kit with equal parts of efficiency and artistry. Everything is very meticulous and everything is musical. He's tremendously
versatile and traditional in the sense that he's got a real foundation. Strasser says his idol was Jimmy Cobb first and then Philly Joe Jones - the classic bebop drummers who were also great percussionists. Strasser has played and recorded with musicians such as: Trumpet player Joe Magnarelli, Guitarist Peter Bernstein, and with groups such as Full House, Planet Jazz, The Omer Avital Group, and Yves Brouqui Trio

Tickets Are Sold By The Table
Table / Seating Chart