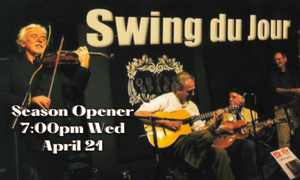 Swing du Jour Performs the irrepressible music of Django Reinhardt and Stephane Grappelli on Tuesday, April 21 from 7 to 9:30 pm.

Safe Social Distancing Seating With Very Limited Ticket Availability. Tickets Are Sold By The Table ONLY. Tables seating 2 - 4 guests, with tables for 6 -8 available upon request. See The Attached Seating Chart. Five Indoor Tables With Open French Doors Facing The Performance And Eight Outdoor Tables Are Available. Rain date will be announced for a Sunday in October.

Fronted by Bethel violin star Howie Bujese, Swing du Jour plays the irrepressible music of Django Reinhardt and Stephane Grappelli. Norman Plankey and Luke Hendon on guitar and Erik Van Laer on stand-up bass provide "la pompe" ("the pump") -- that essential rhythmic pulse that never fails to get toes tapping. Also known as "jazz manouche," this joyful music has its roots in 1920s French Gypsy (Romani) traditions. Howie describes it as "the supreme of oral traditions." With an ever-expanding repertoire of interesting lesser-known Gypsy tunes interspersed with more familiar melodies like "Nuage" and "Minor Swing," this group will leave you breathless! Taken from Bethel Patch in 2014

Howie Bujese: A native of Bergen County, New Jersey, Howie first became interested in the violin in the late ’60 when watching a PBS special he heard American Traditional fiddling for the first time. Over the years Howie studied and learned the traditional fiddling styles of the Southern Appalachians, Ireland, and Scotland and his curiosity eventually led him to Gypsy Jazz. Having no formal training he learned by way of the aural tradition, listening, watching, and playing. Howie performs internationally and has played with a broad range of artists from Jonathan Edwards to David Amram to Noel Redding to name a few. Along with Swing du Jour, Howie and his wife Pam Bujese are members of Cool Struttin’, a quartet playing the Great American Songbook, and also for over thirty years with the NYC area acoustic swing band Out to Lunch.

Norman Plankey: Rhythm Guitar. from his earliest high school bands, with drummer Kenny Aronoff and guitarist Joe Finn, Norman has been playing for over 50 years; all over the stylistic musical map from Motown covers, jug-band/homemade string band, Bluegrass/Old-Time, to working with Pete Seeger in the mid-80s. As a bandleader, he has founded/organized several bands in the swing realm - The Swingaholics (Western Swing), Norman and the Rockwellians (little big band), and Vardo Swing (electric mandolin-driven small group swing). With Swing du Jour, Norman is tackling the devilishly arduous task of rhythm guitar and providing La Pompe (the driving rhythmic pulse).

Luke Hendon: Guitar. Luke has had success in the world of Django music, performing with top players from around the world. In other areas of his career (his spare time) he has opened for legendary acts such as Al Green, Sun Ra, and Los Lobos, performed on Broadway, composed and recorded for television and film, worked with dance ensembles, cruise ships, theatre companies, and many, many bands. In his latest project, Luke Hendon draws from the tradition of the legendary gypsy guitar of Django Reinhardt and comes out swinging, soulful, funky, fresh, and innovative with his own project. In this stripped-down acoustic setting, Luke's guitar takes center stage. "I sort of got obsessed with learning a bunch of Django Reinhardt solos note for note-which took me several years-Now I try to take the technique I gained into creating my own music!"

We're sorry, there are no refunds after tickets have been purchased. In the event of rain or other forms of weather which prohibits an outdoor performance, the rain date performance will be held on the Sunday of that week. If the rain date becomes postponed because of weather, a future alternate weather date will be picked.