Morrison Beals Jazz Quartet at La Zingara Restaurant on May 5 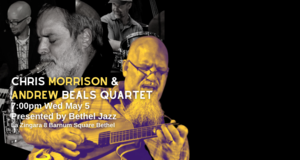 Safe Social Distancing Seating With Very Limited Ticket Availability. Tickets Are Sold By The Table ONLY. Tables seating 2 - 4 guests, with tables for 6 -8 available upon request.

Andrew Beals is a featured soloist and arranger on Jack McDuff’s compact discs for Concord and Summit records. Andrew Beals began his recording career as a leader with his compact disc “Gravy Train” on NASMusic Records. Andrew’s latest recording, with guitarist Chris Morrison entitled “Maybe Someday”, is on the Centaur record label. Andrew Beals has appeared as a leader of his own band and as a featured soloist with Jack McDuff, and others, at many renowned Jazz clubs and festivals (see attached). Beals was a semifinalist at the 1993 Thelonious Monk Jazz Saxophone Competition; and in 1998 he was awarded the prestigious NYU Jazz Orchestra Scholarship for graduate studies in Jazz performance and composition. He received his Bachelor of Arts Music degree at Livingston College, Rutgers University, and has a Master of Arts Music degree from New York University. His teachers were Paul Jeffery, John Stubbelfield, Frank Foster, George Garzone (saxophone) and Jim McNeely (composition) and National Endowment for the Arts (NEA) Jazz Master George Coleman (saxophone)

…”alto saxophonist Andrew Beals, who just may be one of the best players I’ve heard on the instrument.” St. Louis Post Dispatch

...”Beals shows that he is in no hurry, and the thoughtful length of his melodic lines quickly characterizes him as a player who both thinks and feels his phrases.” All About Jazz

…”alto saxophonist Andrew Beals sustained the intensity of each piece, with Beals turning in the most scorching solo on his ballad “Old Folks”. The Boston Globe

…”Andrew Beals picking up the slack, the music had plenty of energy and emotion. Beals’ solos were as shapely as they were intense and as broad in their appeal as they were specific to the band’s needs”… The Chicago Sun-Times

…”The hot and boppish Beals has those patterns in his blood.” The Chicago Tribune

…”Andrew Beals, who seemed to launch his own solos right out of McDuff’s lines.” Seattle Post-Intelligencer

...”Beals is a killer on Sax.” Minneapolis Grooves In Orbit

Christopher Morrison - Guitar Chris began his performing career in his teens with New Haven, CT jazz organists Richard McCrae, Bobby Buster and Eddie Buster. He has recorded and or performed with Adam Nussbaum, Lew Soloff, Joe Beck, Bennie Wallace, Harvie S, and John Stowell. Most recently he has appeared with the legendary guitarist, Joe Diorio, as his guitar duo partner. Chris’s latest recording, with saxophonist Andrew Beals entitled “Maybe Someday”, is on the Centaur record label. Dr. Ken Ciuffreda of Just Jazz Guitar magazine wrote, “Chris produces one of the most beautiful sounds I have ever heard coaxed out of a jazz guitar – great phrasing, perfect musicality, warmth and expression – all played effortlessly with seemingly unlimited technique.” He has earned several awards for his teaching including a Distinguished Adjunct Appreciation Award and a Centennial Award for Excellence from Western Connecticut State University.

"Chris is a brilliant musician and a great person. I have encountered very few musicians with his talent for playing AND teaching. This guy can really play!"

"Chris Morrison is a master of the guitar! One of the outstanding guitarists in the world today."

Kyle Koehler - Organ Originally from Philadelphia, a hot bed for jazz organ, Kyle grew up hearing and then playing with some of the jazz masters (Shirley Scott, Charles Earland, Grover Washington, etc.). Besides leading his own trio, he has performed with some of the top names in jazz, Lou Donaldson, David “Fathead” Newman, Bobby Watson and Jimmy Heath. Music from his critically acclaimed CD “EXIT 13” was featured on HBO’s “Sex In The City.” In 2002, Kyle was chosen as a Jazz Ambassador to tour Africa on behalf of The Kennedy Center and US State Department. Koehler has performed at many major festivals including the Monterey Jazz Festival, Detroit Jazz Festival, and the Newport Jazz Fest in Madarao (Japan). Kyle was also recently voted as a “Rising Star” in the Downbeat Critics Poll. Kyle is very passionate and committed about keeping the jazz organ tradition alive. While playing, he pays homage to great organists, such as Larry Young, Jimmy Smith, and Don Patterson, and yet maintains a strong musical voice all his own.

Joe Strasser - Drums Joe Strasser is a Bethel native, now an in-demand drummer in New York. Joe Strasser has lived in New York City since 1990 and played with jazz greats George Coleman, Etta Jones, Larry Goldings, Pete Bernstein, Harold Mabern including scion of Clint Eastwood, bassist Kyle. Joe is a "one of a kind stylist", with his own take on jazz drumming... his own sound. A colorist, who is mindful of the effect of each stroke on the musicians around him as a whole, Strasser mines the rest of the components of the drum kit with equal parts of efficiency and artistry. Everything is very meticulous and everything is musical. He's tremendously

versatile and traditional in the sense that he's got a real foundation. Strasser says his idol was Jimmy Cobb first and then Philly Joe Jones - the classic bebop drummers who were also great percussionists.

Five Indoor Tables With Open French Doors Facing The Performance And Eight Outdoor Tables Are Available. Rain date will be announced for a Sunday in October. Admission Is Still Only $15.00 Per Person But Must Be Purchased As A Table For Safety Table Of Two = $30., Four = $60., Six = $90., and Eight = $120