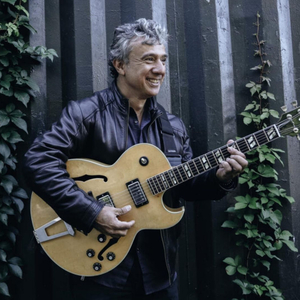 Nelson Riveros - Guitar: Nelson is New York-based guitarist Nelson Riveros is part of an emerging force of a new generation of Contemporary Latin-Jazz artists. His debut recording titled ‘Camino Al Barrio’ peaked at #8 on the Jazz Week World Music Chart. He was nominated among his peers as ‘Next Best Generation Artist’ and ‘Best Latin Jazz Guitar’ for the 2010 Latin Jazz Corner Best of The Year Awards.

Throughout we can hear the band playing together as one, channeling the fluidness and virtuosity one hears on Wes’ recordings.

Tony Cintrón - Drums: Tony Is a Puerto Rican American originally from the Bronx, Tony Cintrón was raised as an inquisitive young musician in the culturally diverse city of Mt. Vernon, NY. Developing an innate ability to perform on drums or percussion with equal skill, Tony was often jamming, gigging, and subsequently recording and touring with adept musicians from numerous genres. Even UNLIMITED TOUCH represented a unique “post-disco” hybrid that appealed to his rhythmic sensibilities.  The most outgoing personality of the group, Tony first “recognized” the guys approaching a New York City street corner one fateful night as Crown Heights Affair; who later took an interest in producing the young upstart group now being honored tonight.

Tony has been on stages and in studios around the world with such diverse artists as Tom Browne, Roberta Flack, Herb Alpert, Phyllis Hyman, Noel Pointer, Spyro Gyra, Willie Colón, Ruben Blades, and as of late, Grammy-Award winning DJ-Producer Louie Vega with his “Elements of Life” Band. Tony also had a Grammy Nomination for his drumming contributions on jazz legend Dizzy Gillespie’s album featuring Stevie Wonder called  “Closer To The Source”.

Harvie S - Bass: Harvie S is an award-winning bassist, educator, composer, arranger, and producer, is continually challenging himself and his peers, expanding the borders of musical direction.

His last Recording with Alan Broadbent Trio “New York Notes” on High Note Savant Records was on the Jazz Week Charts for 4 months and garnered rave reviews. In Sept 2020 the follow-up “Trio in Motion” will be released on High Note Savant. Both CDs were produced by Harvie and he was also, recording engineer and co-mixed it with Dave Kowalski.

Harvie’s album with the legendary Sheila Jordan Harvie S duo is a magical live performance released on High Note Records in 2012 called “Yesterdays”. Jazz times included it in the best 100 recordings of 2012.

In January 2013, Witchcraft was released on High Note Savant with Jazz master Kenny Barron. It was #1 on Jazz Week national radio charts. This is a follow-up to the previous 2009 duo recording with Kenny Barron, Now Was the Time, also on High Note/Savant Records.

Harvie S was selected as a Jazz Ambassador for the United States and toured throughout Europe and Southeast Asia in this honored capacity. He has been a guest on NPR's All Things Considered and Fresh Air. His career is documented in Leonard Feather’s Encyclopedia of Jazz, the Grove Dictionary of Jazz, and the All Music Guide. Mr. S composed the musical themes for the documentaries The Trumpet Kings, The Piano Legends, and John Coltrane.

In addition to his performance career, Harvie S is an active educator. He is a Professor of Jazz Bass and Jazz Ensemble at Manhattan School of Music, in both Undergraduate and Graduate divisions. Currently developing new music for a variety of musical ensembles and recordings, Harvie S is integrating his lifetime of musical experience and research into opening doors to new and exciting pathways of creative expression. He has also written a series of bass duets that are revolutionary in their concept for teaching and performing.