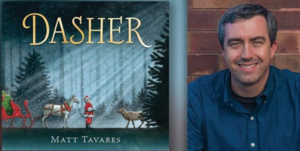 “Bethel’s Byrd’s Books is so lucky to host award-winning author-illustrator, Matt Tavares, for a signing at the shop on Saturday, December 10th at 4:00pm,” says proprietor Alice Hutchinson.  “His new illustrations for Clement Moore’s Twas the Night Before Christmas take the familiar poem back to the original text. The black and white illustrations just draw you into the magic of the season.”

Registration is not necessary, but you may wish to pre-order; even if you cannot attend we will get the book(s) signed for you. Be sure to add any personalization to the order — or better yet, come meet the author and learn how wonderful his books are!

As his senior thesis at Bates, Tavares wrote and illustrated Sebastian’s Ball, about a boy who catches a magical foul ball at a Boston Red Sox game. Three years later in 2000, after much revision, it became his first published picture book, Zachary's Ball from Candlewick Press. Zachary's Ball went on to win a Massachusetts Book Award Honor and to be named one of "40 Classic New England Children's Books" by Yankee Magazine. At least 20 more books illustrated by Tavares have been published since then, including several for which he has written the text. They have won several awards including three Parents' Choice Gold Awards. His artwork has been exhibited at the Museum of American Illustration, the Brandywine River Museum, and the Mazza Museum of Picture Book Art. He has presented at the Smithsonian American Art Museum, the Eric Carle Museum, and the White House Easter Egg Roll, and has done book signings at Fenway Park.

Byrd’s Books is located at 178 Greenwood Avenue, across from the Bethel Public Library. Author discussions and Book Group gatherings are regularly added to Byrd’s Books’ calendar of events at ByrdsBooks.com Hours are Tuesdays through Saturdays 10:00am to 6:00pm and Sundays 12:00 noon to 4:00pm. For directions to the store or more information, call Byrd’s Books at 203-730-2973. To review the shop’s expanded catalog of new titles, go to ByrdsBooks.com