Details
Published on Thursday, 17 September 2020 11:58
Written by Library of Congress 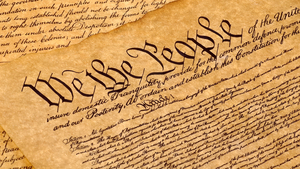 James Madison, later known as the “Father of our Constitution,” was among the most influential delegates at the Constitutional Convention. His notes form the largest single source of materials for Farrand’s Records, one of several collections in A Century of Lawmaking for a New Nation: U.S. Congressional Documents and Debates, 1774-1875.

"We the People of the United States, in Order to form a more perfect Union, establish Justice, insure domestic Tranquility, provide for the common defence, promote the general Welfare, and secure the Blessings of Liberty to ourselves and our Posterity, do ordain and establish this Constitution for the United States of America."

Preamble to the Constitution of the United States of America

The product of four months of secret debate, the Constitution replaced the Articles of Confederation and proposed an entirely new form of government.

Adopted by the Continental Congress in 1777, but not ratified by the states until 1781, the Articles of Confederation created a loose confederation of sovereign states and a weak central government. With the passage of time, the defects in the Articles of Confederation became apparent. The Continental Congress commanded little respect and no support from state governments anxious to maintain their power. Congress could not raise funds, regulate trade, or conduct foreign policy without the voluntary agreement of the states.

Events such as Shays’ Rebellion, an armed uprising by debt-ridden farmers in western Massachusetts in 1786 and early 1787, exposed the weaknesses of the federal government and galvanized calls for revising the Articles of Confederation.

In an effort to deal with problems of interstate commerce, a convention in Annapolis was held in September 1786.  Led by James Madison and Alexander Hamilton, the delegates at the Annapolis Convention issued a proposal for a new convention to revise the Articles of Confederation.

On February 21, 1787, the Continental Congress called for a national convention to meet in Philadelphia to revise the Articles of Confederation. By May 25, the state delegates had reached a quorum and the Constitutional Convention officially began. George Washington was selected unanimously as president of the Convention.

From the outset, delegates clashed over issues of state sovereignty while small and large states battled over the distribution of power. Fears of creating a too powerful central authority ran high. The Convention tackled basic issues including the essential structure of the government, the basis of representation, and the regulation of interstate trade. As he submitted the Constitution to the Continental Congress, George Washington acknowledged the difficult task the Convention faced:

"It is at all times difficult to draw with precision the line between those rights which must be surrendered, and those which may be preserved; and, on the present occasion, the difficulty was increased by a difference among the several States as to their situation, extent, habits, and particular interests…thus, the Constitution which we now present is the result of a spirit of amity, and of that mutual deference and concession, which the peculiarity of our political situation rendered indispensable."

Letter from George Washington to the Confederation Congress, accompanying the Constitution, September 17, 1787. Annals of Congress. A Century of Lawmaking for a New Nation: U.S. Congressional Documents and Debates, 1774-1875

Although the Constitutional Convention met for the last time on September 17, 1787, public debate over the Constitution was just beginning. The Constitution specified that at least nine states ratify the new form of government, but everyone hoped for nearly unanimous approval. As the states called their own ratifying conventions, arguments for and against the document resurfaced. Writing under the pseudonym Publius, Alexander Hamilton, James Madison, and John Jay defended the proposed plan in a series of newspaper articles, later collected as the Federalist Papers.

The Constitution was officially adopted by the United States when it was ratified by New Hampshire on June 21, 1788, the ninth state to do so. The first Congress under the new Constitution convened in New York City on March 4, 1789, although a quorum was not achieved until early April. On April 30, 1789, President George Washington delivered the first inaugural address, and within his initial term the first ten amendments—known as the Bill of Rights—were adopted, establishing the fundamental rights of U.S. citizens and assuaging many fears associated with the relatively strong central government the Constitution provides.