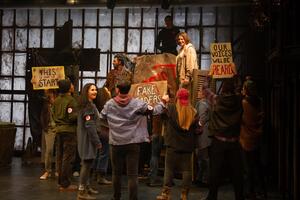 The dystopian world of "The Handmaid's Tale" and its fight for freedom in a violent world mixed with destruction, desire, despair, greed and persecution is the inspiration behind ACT of CT's thrilling futuristic take on "Jesus Christ Superstar," the Andrew Lloyd Webber/ Tim Rice musical that began life as a concept album in 1970, made its Broadway bow the following year as a fully-realized stage musical and finally crossed the pond - so to speak - for its splashy, eagerly-awaited 1972 debut in London's West End.

A jarring, explosive interpretation of the last week in the life of Jesus of Nazareth, this theater-shaking incarnation adapts a competent, angry, important motif of urgency, laced with rock-concert consistency, befitting sexuality, heightened frenzy and bold leaps of wildly crazed abandon to retell the Christ story as viewed through a crafty lens of illustrious examination and collective debate.

This is "Jesus Christ Superstar" as you've never seen it before. And therein, lies the heart and soul of this imaginative piece of musical theater that shimmers with attentive, demanding directness and interpretive definitude.

Between the pungent musical score and the elaborate visual display created by the production's stellar design team, this newly envisioned "Jesus Christ Superstar" is an adventurous oeuvre chock full of mind-blowing spontaneity, enthusiasm and grit, set against an intricately designed futuristic landscape of high-voltage drama, sentiment and game-inducing melange.

"I began directing this incredibly talented company of actors just four days after the Russian invasion of the Ukraine," reports director Daniel C. Levine. "It is not lost on me that our version of 'Jesus Christ Superstar' depicting the freedom fighters, revolutionaries, and refugees, in some small way mirrors the atrocities taking place 4,775 miles away from Ridgefield. These current events also influenced our production."

An interpreter with a keen eye for justified detail, creation, smartness and wisely-stated, bleeding-edge coda, Levine takes hold of this production working from a proven blueprint, hellbent on originality, engagement, stop-start consciousness and revolutionary bravura. His direction is carefully thought out scene by scene, song by song, line by line. Who goes left? Who goes right? Who ends up front and center? He does it all with a dash, a spin, a thought, a pause, a reflection, a moment.

As "Jesus Christ Superstar" evolves, he also shapes and molds entrances and exits to conform to the musical's perfectly synced orchestrations. How an actor, stands, sits, moves, wipes a forehead, lays out a blanket, unpacks a box of canned goods backs or falls to the ground is also part of the "Superstar" directorial mix as is the placement and stance of each and everyone on the ACT of CT stage as individuals, soloists, members of the ensemble or observers of the actual story, its advancement and gripping, angst-ridden conclusion.

What separates this revival from other interpretations of the two-act musical is Levine's desire to dig deep, experiment, change and implement, surprise and shock, taunt and tease and never once doubt his theatrical showmanship. Relying on his knowledge and fully imagined skills as both actor and director, he takes a 52-year-old musical, twists and shapes it to his own liking and lets it breathe and resonate until everything naturally and evenly falls into place.
In Act II, for example, the whip-stroke effect of the "39 Lashes" is signified by red stage blood - rather that actual whips - that is splashed hard against Christ's naked torso. It is a shocking, defining moment that works most imaginatively as does Levine's Act One opening montage that sets the stage for what's to come using elements, sights and sounds reflective of "The Handmaid's Tale," but reinvented for the atmospheric playground that is "Jesus Christ Superstar."