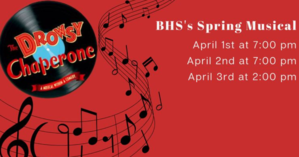 We are very excited to announce that the Bethel High School Theatre students received 5 Halo Award Nominations for the play A Christmas Carol and 15 Halo Nominations for the Musical The Drowsy Chaperone. The students will perform and represent the school in the Award Ceremony on June 1st at the Palace Theatre in Waterbury.

We would also like to announce that we are participating for the first time in the 5th Annual Stephen Sondheim Awards. This is Connecticut and Rhode Island's regional award program in association with the National High School Musical Theater Awards, celebrating excellence in high school musical theater.

Bethel High School Theatre received 3 nominations for Best Actress, Best Actor, and Best Supporting Actress. The Award Gala will be on June 6th at the Shubert Theatre in New Haven.