Little Shop of Horrors at ACT of CT - A Review 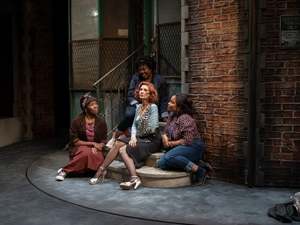 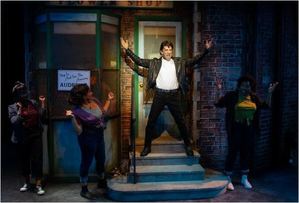 This LITTLE SHOP is the best production I have ever seen; try to get tickets for the remaining performances, if you dare

ACT of CT is a relatively new theatre venue located in Ridgefield. The stellar production of LITTLE SHOP OF HORRORS marks the first production of their second season. I was only able to catch the outstanding production of EVITA last season, so I was excited to return to what is an extremely comfortable venue for audience members, as well as a location where many well-known Equity performers have been invited to perform. This is truly an up and coming theatre less than nine miles from Danbury that I hope to return to often, and this show is the perfect choice for this space.

One of the best parts of LITTLE SHOP was having the opportunity to see ACT's Artistic Director Daniel C. Levine on the stage for more than his curtain speech. Mr. Levine took on the role of the abusive dentist Orin Scrivello DDS, as well as "Bernstein, Snip, Luce, Everyone else." I didn't catch this list of credits in the program before the show began, but I immediately suspected that he was not only playing the evil dentist (to the hilt) when the first male supporting character made an appearance. The actor had to navigate a slew of quick changes to cover all of his roles and he did so without a hitch.

Mr. Levine notes that LITTLE SHOP has been a favorite of his since childhood. He admits that watching Steve Martin played the role of the dentist in the film version was the reason that he wanted to be a dentist when he grew up. When he graduated from college, he did, in fact, enroll at Tufts University School of Dental Medicine; during his second year at Tufts, he auditioned for, and got cast in, LES MISERABLES. He dropped out of dental school and began his career in the theatre. Ten years later he was cast as "The Dentist" in the Broadway National Tour of LITTLE SHOP OF HORRORS that was directed by Jeffy Zaks, and he went on to play the role in many productions. You can't make this stuff up!

It was such a treat to see this professional, who cites "co-founding and serving as Artistic Director for ACT of CT" as his favorite role to date, on his own stage. His extensive Broadway/Broadway National Tours include MAMMA MIA!, LITTLE SHOP OF HORRORS, THE ROCKY HORROR SHOW, JCS, CHICAGO, LES MISERABLES, and TOMMY; he was nominated for Best Actor in a Musical by The League of American Theaters and Producers for his role as the creepy cousin Kevin in THE WHO'S TOMMY and originated the role of Mary Sunshine in the Broadway National Tour of CHICAGO.

Robb Sapp (just off playing Timon, Zazu and Ed in the North American tour of Disney's THE LION KING) was clearly up to the challenge of the role of Seymour. Mr. Sapp also played Boq in WICKED on Broadway and Pinocchio in SHREK. The handsome actor transformed himself into the nerdy role, nailed the physical comedy and sang wonderfully.

William Thomas Evans (CAMELOT, THE SCARLET PIMPERNEL on Broadway) was a joy in the role of flower shop owner Mr. Mushnik. Kent Overshown (MEMPHIS tour,) who has appeared at both Goodspeed and Westchester Broadway Theatre, was offstage as the villainous Voice of the Plant ("Feed Me") in his ACT debut.

Laura Woyasz (WORKING at ACT, Glinda in WICKED on Broadway, as well as the WICKED tour) gave what I thought was a fresh take on the role of the human Audrey. She had the required voice and the comic timing, but her look was slightly toned down and something about her performance made me appreciate the level of tenderness she has with Seymour that I hadn't noticed before. I had to stop myself from thinking that she must have been spectacular in the role Glinda; focusing on the red wig helped me think "Audrey 1." Kudos to Ms. Woyasz on a masterful performance.

The actresses who sang and danced the roles of the three street urchins all showed off their powerful singing voices throughout the two acts. Kadrea Dawkins, a Rider University grad who appeared in DOG MAN: THE MUSICAL at TheaterWorks USA, played Chiffon. Rachelle Legrant (DREAMGIRLS) was Ronnette. Ashley Alexandra Sheldon, a NYC based singer/actress played the role of Crystal in her ACT debut. WCSU graduate Jaclyn Mercer and NYU/Tisch grad Ian Shain made up the ensemble/swings. It is amazing that this entire cast only had three weeks in rehearsal and the band only two days to learn the score.

Full disclosure: The initial reason I reached out to ACT to review LITTLE SHOP was because I became aware that a talented Western CT State University graduate was a part of the production. Thomas Bergamo takes on the role of the puppeteer for the various incarnations of the Audrey II, "the strange and interesting plant" and, although I would not be able to see or hear him during the two acts, I wanted to be there to cheer for him at the curtain call. Thomas Bergamo graduated from WCSU with a BFA in Musical Theatre and this summer was in residence at Connecticut Repertory Theatre for the Nutmeg Summer Series. Mr. Bergamo played Herman/Kit Kat boy in CABARET, an ensemble member in MAMMA MIA! at CRT at UConn Storrs, dance captain for BIG RIVER at Oldcastle Theater Company in Bennington, Vermont, and of course he worked on several WCSU productions during his four years on the campus.

The musical was directed and choreographed by Jason A. Sparks and P. Jason Yarcho (WICKED on Broadway) was the music director. Bryan Perri is the resident music supervisor and Isaac Hayward is associate music director. The musicians in the live band included Mr. Yarcho conducting from behind a piano (with Mr. Hayward as his sub,) Tom Cuffari on keyboards, Jeff Carlson on electric/acoustic guitars, Arnold Gottlieb on electric bass and Dennis Arcano on drums and percussion. I felt that the first few bars of the prologue overwhelmed the space, but thankfully it was quickly toned down to work beautifully.

The scenic designer Ryan Howell turned the stage into a bright and functional skid row scene that was the best set I have ever seen for LITTLE SHOP. Jack Mehler was in charge of lighting and John Salutz took good care of the sound design. I really liked the costumes designed by Ryan Park that did not go over the top, the wig and hair design by Tommy Kurzman that accented the ensembles perfectly and the props designed by Abigail Bueti. Shout out to the excellent production stage management of WCSU graduate Theresa S. Caroll (WORKING) and her assistant. and fellow WCSU grad, Stephanie L. Brown (WORKING.)

Everything about this production of LITTLE SHOP is up close and personal and it worked exceedingly well. Discounts are offered on tickets for patrons who wish to come back and see the production again. There are special guest star walk-on roles (that were auctioned off at the 2019 ACT Gala) for four upcoming shows in the role of customer. Don't miss the plastic cup holders on both sides of the comfortable seats that many of the young patrons at the matinee took advantage of. Patrons also have the option of taking a selfie with the largest plant, with donations going towards the sensory friendly performances offered by ACT. But whatever you do…"don't feed the plants!" The upcoming shows scheduled for ACT's second season include GODSPELL (I know, right?) a new musical NICKEL MINES and FREAKY FRIDAY, as well as an impressive BROADWAY UNPLUGGED series.

Nancy Sasso Janis, writing theatre reviews since 2012 as a way to support local venues, posts well over 100 reviews each year. In 2016, her membership in the Connecticut Critics Circle began and as did her contributions of theatrical reviews, previews, and audition notices. Follow the reviewer on her Facebook pages Nancy Sasso Janis: Theatre Reviewer and Connecticut Theatre Previews and on Twitter @nancysjanis417 Check out the NEW CCC Facebook page.