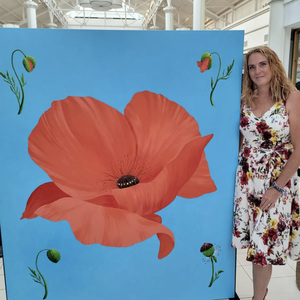 DANBURY, Connecticut — When four emerging artists and graduate students in the Master of Fine Arts program at Western Connecticut State University learned about the Movable Mural Showcase project at Danbury Fair mall, they jumped at the chance to share their creativity and talents with the public for a project hoping to “inspire balance, hope and connection.”

Rosa’s mural will be revealed at a reception on Thursday, Sept. 1, at 6 p.m. Her mural is a Plein Air painting and depicts people slowly re-emerging from the pandemic at a popular Danbury park, embodying the spirit of re-awakened activities and capturing the impact of nature as a source of mental wellness.

Gilmores’s mural is based on a painting by Giotto Di Bondone and a quote that inspires her work: “Every nature, every modeled form, every creature, exists in and with each other.” Her reveal and reception take place on Thursday, Sept. 8, at 6 p.m.

Escribano’s mural was revealed on July 21, and incorporated symbols of his Caribbean and African heritage that represent the sun and rising. To exemplify re-emergence, he also uses the blue crescent, a symbol of faithfulness, which is critical during the reawakening process.

Chandler’s mural was revealed on July 28, and relies on her skills as a botanical illustrator. The mural reflects her view on the re-emerging and awakening of society post-COVID, and uses the poppy to show how humans are unique and beautiful and can “bud, unfurl, open and bloom in the way that feels best” for each individual.

The other two artists are Eric Chandler and Dedan Davenport, whose reveal receptions are on Aug. 18 and Aug. 25 respectively.

The Cultural Alliance of Western Connecticut and Art in Common of Ridgefield are collaborating with Danbury Fair on the project. According the mall leadership, the focus of the movable murals is “social sustainability, such as health and well-being, equitable access and community buildings” to highlight the themes of Sustainable Environment and Social Emergence.

Art in Common founder Aimee Jette ’23, also an M.F.A. student at WCSU, coordinated fellow students for the movable mural project while the Cultural Alliance of Western Connecticut encouraged local artists to submit proposals for a larger wall mural in the Lord and Taylor corridor. The WCSU artists use the same color palette as this 1,800-square-foot mural.

“This collaboration between my nonprofit Art in Common Inc., the Cultural Alliance of Western Connecticut and Danbury Fair mall is part of our bigger initiative to support emerging artists in our area,” said Jette. An art therapist who works with teens and young adults to help them process emotions through artwork, Jette said, “As an artist myself, I know how important it is to be supported in your craft, and I believe deeply in the power of art to heal, and the power of viewing art to transform.”

Arts In Common is a nonprofit organization that “uses the power of art to bring communities together and foster connection.” The Cultural Alliance of Western Connecticut provides support to artists, creative entrepreneurs and arts and cultural organizations, and works to advance the arts in local communities.

The WCSU Department of Art is located in the Visual and Performing Arts Center on the university’s Westside campus at 43 Lake Ave. Extension in Danbury and is part of the School of Visual and Performing Arts. For more information about the many undergraduate and graduate programs available in art, music and theatre arts, go to www.wcsu.edu/svpa/ or contact WCSU Public Relations at This email address is being protected from spambots. You need JavaScript enabled to view it. .