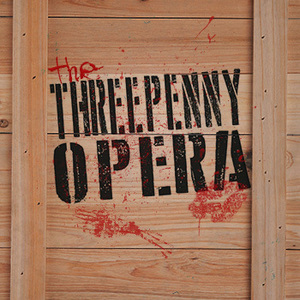 "The Threepenny Opera" came to the stage of Muhlenberg College with an iconic score, powerful scenic design, and an anti-capitalistic diatribe.

Madeline Olexy of Bethel was a member of the Cast in the production that director James Peck describes as "'The Godfather' meets 'The Office.'"

"It has a cutting, hard-edged humor that I think is very appealing," Peck says. Underneath this humor though, is an unflinching look at capitalist systems and violence.

The show follows the tension between crime gangs and the wealthy class in Victorian London. When Polly Peachum elopes with the ruthless gang leader Macheath, their marriage sets off a turf war with the elder Peachums for control of London's lucrative underground.

"The general aim of the show is to comment on these structures and effects that we experience from capitalism," says Joe Grisanzio '23, who plays Macheath. "And how all of these horrible things that these characters do throughout the show are a product of a system that's working against them."

The show ran Oct. 28 through Nov. 6 in Muhlenberg's Empie Theatre. The production was funded in part by the Kurt Weill Foundation for Music.

"The Threepenny Opera" features a score by Kurt Weill, including the celebrated song "Mack the Knife," and book and lyrics by Bertolt Brecht and Elisabeth Hauptmann. Only recently has Hauptmann been fully credited for her work on the book, lyrics, and translation of the piece. The first production debuted in 1928.

Peck directed "The Beggar's Opera" at Muhlenberg, and musical director Vincent Trovato created new orchestrations for it. Both of them are working on "Threepenny" now.

"You can put a price tag on everything; even humans can be up for sale."

The design of the production goes beyond the aesthetics of Victorian London. Set designer You-Shin Chen designed the set as an Amazon warehouse in a distribution center, built out of industrial materials.

"You can put a price tag on everything; even humans can be up for sale," Chen says. "When the characters are onstage, they are the goods coming from these shipping crates that also act as the architecture of their world."

Peck says that Chen's design is particularly pertinent to the Lehigh Valley, where distribution centers are one of the fastest-growing industries.

"It doesn't feel like we're just trying to make these broad societal statements about the show and about the world we live in," Grisanzio says. "But we're saying, 'Here's a direct example of the message of 'Threepenny' happening in real life and in real-time, right in our area."

In addition to the set, the costumes comment on the themes of the production in bold, bright colors. Designer Rebecca Lustig says the costumes are inspired by the punk street fashion of Vivienne Westwood and Alexander McQueen.

"Both designers have taken street fashion and reinterpreted it into 'high fashion,'" Lustig says. "Even rebel fashion becomes a commodity."

Allison Mintz '23, who played Mrs. Peachum, says she appreciates the irony of the production.

"It's so funny to think that things that we use on the show will even be ordered from Amazon," Mintz says. "And as much as we can say we like to hate the structures and hate the way that people are treated, there are still things that we need to use, and it speaks to the fact that humans are kind of rotten, and that is something that comes up a lot in the show."

While the show speaks to these serious themes, Peck says, at its heart it's a highly enjoyable evening of theatre - a raucous comedy with a jazzy, sophisticated score.

"I want people to enjoy themselves," he says. "The play is very funny. The songs are great. And it's a great story."