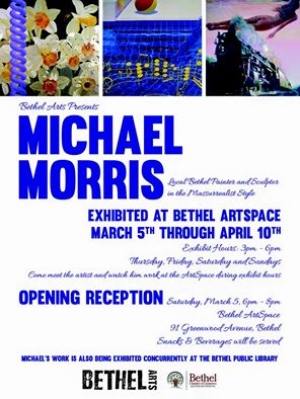 In our gallery: "Massurrealist" Painter & Sculptor Michael Morris will be opening his latest exhibition this Saturday, March 5th. The Opening Reception will be held that night from 6 p.m. to 8 p.m. The community is invited to attend the reception, where snacks and beverages will be served.

Michael Morris's exhibit will be showing through April 10 @ Bethel Artspace. Stop during exhibit hours, Monday, Friday, Saturday and Sunday from the hours of 3 p.m. to 6 p.m. and meet the artist and watch him work at the ArtSpace.

Michael Morris originally from Jersey City, NJ. now lives in Bethel, Connecticut. He is a painter, sculptor and graphic designer. A graduate of Kansas State University with a Bachelor of Science in Art Education and Yale University with a Bachelors and a Masters of Fine Art in sculpture. His work has appeared in several group shows, solo exhibits at Westport Art Center, in Bethel and South Norwalk, CT showing his large-scale Massurrealist* paintings. He won awards at Silvermine “Art of the Northeast” and “Contemporary Visions” at the University of Bridgeport. Earning a living as a graphic designer/art director for many years. His wide range of clients include companies like Beech Aircraft, NBC, Dos Equis, HBO, General Cigar, and PEZ. During this design period Morris kept painting and recently and importantly has returned to sculpture; working in a geometric/abstract framework that continues to explore the concepts of vibrational energy in all things.

Michael Morris is an originator of the Massurrealist Art movement. Massurealism is an art form rooted in the interplay between mass media, pop art, contemporary culture and Surrealist imagery. The term massurrealism was coined by artist, James Seehafer. This movement includes many meanings: First, is the concept of mass as in the mass media of television, advertising and the internet, etc. Second, the products of mass production, as in the new phones, automobiles and jet aircraft, vacuum forming, etc. Third, are images from mass culture, beer cans, beach balls, shopping carts, swimming pools, fashions, etc. Encompassing inexplicable concepts from the mass studied by particle physics to vibrational energy and the ideas of oneness of all matter. In other words, combining visual icons from the outer world (what we call reality) and the inner world (the surreal, the venue of the subconscious). Including the big mass/weight we feel and attribute to our .emotions, thoughts and dreams.

To see more of Michael's work stop by the Bethel Public Library, where some of his other work is on display.