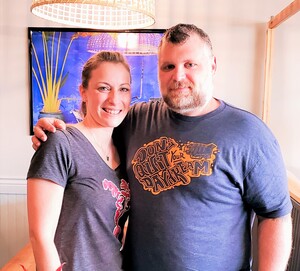 Jeff Taibe, the acclaimed, versatile chef behind Taproot - next to the old Bethel Cinema - can do it all, or so it seems. However, a month ago he returned to his roots when he unveiled the restaurant’s new Southeast Asian menu. He’s had a passion for that cuisine ever since he spent 18 months in Singapore after studying at the French Culinary Institute. “I love its brightness,” said Taibe. “It is clean, healthy and has so much flavor.”

The new menu takes diners on a tour of India, Thailand, Indonesia, Singapore, Malayasia and Vietnam. According to Taproot co-owner Steph Sweeney, “Diners will find the menu more descriptive than the old one. It helps people - especially those unfamiliar with Asian cuisine - understand what they are ordering. It is also more takeout friendly.”

Many of the dishes are not so very unfamiliar – like chicken satay, Vietnamese chicken wings and dumplings. Then, under “Bites & Small Plates,” there is Laab Nua Dib. Read the description, and you’ll see that it is basically beef tartare with Taibe’s special Southeast Asian treatment.

Some of the unfamiliar names have a musical ring to them. Like Gado Gado, under “Veggies & Sides”. Taproot’s version of this Indonesian salad – the name literally means “mix-mix” – is a combination of charred cabbage, bean sprouts, cucumbers, radish, fried tofu and egg with a peanut sauce. When asked about the use of tofu in this and other dishes, Taibe explained that it is an essential Asian ingredient, and he believes his vegetarian dishes have universal appeal.  Talk about universal appeal: Check out the Shiok Burger, a Singaporean “fast-food” burger, complete with sesame bun, American cheese, special sauce, onion, lettuce and served with fries (bacon is extra).

What are the most popular items on the new menu? “Definitely Smoked Mushroom Spring Rolls and the Lamb Murtabak, an Indian-style flatbread,” said Sweeney. “The latter, ground lamb with egg, cheddar cheese and a curry dipping sauce, is a Southeast Asian version of the lamb patty melt so popular on the old menu.”

The menu has three dessert choices: two Asian puddings and Iced Kachang, a classic Singaporean dessert. The menu also includes cocktails with an Asian flair and an impressive list of craft beers from Thailand, Hong Kong, Japan and Connecticut. The beers are on the light, crisp lager side, which pair well with the new menu.

“One of our goals with the new menu is to appeal to different pallets and to offer true Asian food,” said Taibe. “To maintain authenticity, the sauces, the pastes, etc. - everything is made in house. I just bought a greenhouse and plan to grow some of hard-to-get traditional ingredients. And as the growing season heats up, I will continue to turn to local farms, like the Hickories in Ridgefield.”