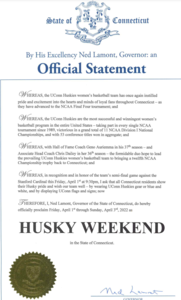 Governor Ned Lamont today announced that he is proclaiming Friday, April 1, through Sunday, April 3, 2022, as “Husky Weekend” in the State of Connecticut in recognition of the UConn women’s basketball team for playing in the NCAA Final Four tournament on Friday night.

The governor is urging all Connecticut residents to show their Husky pride this weekend by wearing UConn Huskies gear, displaying UConn flags and signs, and sporting blue and white.

“The Huskies have been nothing short of inspirational and I am incredibly thrilled that they will be representing Connecticut on a national stage this weekend,” Governor Lamont said. “These student-athletes have represented UConn with integrity, character, and competitive excellence both on and off the court and are inspiring many young basketball fans who want to follow in their footsteps. I urge all Connecticut residents to put on your blue and white and remind the nation why Connecticut is considered the college basketball capital of the world.”

“Our Huskies continue to astonish and inspire Connecticut residents each and every year,” Lt. Governor Susan Bysiewicz said. “Their determination and grit are second to none, and their success off the court and in the classroom is just as impressive. I know I’ll be wearing my UConn gear and I encourage everyone throughout our state to show their support with their blue and white. We wish them all the best of luck this weekend. Let’s go Huskies!”

UConn is scheduled to play the Stanford Cardinal in the Final Four tournament on Friday at 9:30 p.m.