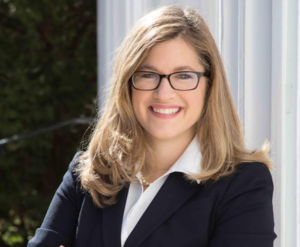 Attorney Jennifer Collins, a Connecticut Magistrate and Senior Partner with the regional law firm Cramer & Anderson, is running for Judge of Probate for the Northern Fairfield County Probate District.

A resident of Ridgefield with her family, Attorney Collins was endorsed by Republican delegates in May to succeed Judge of Probate Daniel O’Grady. He passed away in March after a long and distinguished career of public service to the 45th District and the Town of Bethel.

Attorney Collins works closely with Cramer & Anderson’s Trusts & Estates and Elder Law attorneys, and is the leader of the firm’s Social Security Disability section. She has 23 years of litigation experience as part of a practice that also focuses on personal injury law and workers’ compensation.

Helping clients who most need compassionate and powerful advocacy is the cornerstone of Attorney Collins’ career, and she has vigorously represented the disabled, the injured, the elderly, children, and parents in crisis in Fairfield and Litchfield counties since 1998.

Attorney Collins was honored with a 2021 Distinguished Leaders Award from the Connecticut Law Tribune (CLT) in recognition of her work as an attorney, her law firm leadership, and giving back to the legal profession through pro bono and volunteer service, which includes her service to the Judicial Branch as a Connecticut Magistrate.

Attorney Collins has 11 years of experience as a magistrate, having been vetted and appointed by the Chief Court Administrator of the Connecticut Judicial Branch. She has issued more than 300 written decisions in small claims court and has overseen numerous trials in both Small Claims Court and regarding motor vehicle infractions.

“As a Connecticut Magistrate, I have earned a reputation for effectively managing large court dockets with respect and compassion. As an attorney, I have earned a reputation for advocacy, service and results for clients who are distressed or in crisis. The ability to effectively listen to people is critical in managing litigants as well as advocating for clients. I intend to utilize all of my judicial, litigation, and management experience to effectively serve the residents of Bethel, Newtown, Redding, and Ridgefield,” Attorney Collins said.

The Distinguished Leaders Award also praised Attorney Collins’ investment in enriching local communities with volunteerism and leadership on assistance initiatives, as well as making an impact on youth with passionate, nurturing engagement and mentorship—advocacy that includes leadership of Cramer & Anderson’s support for The Center for Empowerment and Education in Danbury, formerly The Women’s Center of Greater Danbury, which seeks to end domestic violence, while offering prevention and crisis intervention programs, and support services.

Attorney Collins studied at Fairfield University and received a BA in English with a Minor in Art History and Political Science in 1994. She attended the Catholic University of America Columbus School of Law in Washington, D.C., and earned her Juris Doctorate in 1997.

Attorney Collins is a 24-year resident of the Northern Fairfield County Probate District and resides in Ridgefield with her husband, John, their two children, Jillian and Alex, and Alex’s Autism Service Dog, Chelsea.