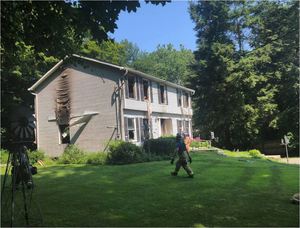 Stony Hill Volunteer Fire Company has reported that his morning just after 10am, Bethel and Stony Hill Firefighters were alerted to a house fire with possible entrapment on Nashville Road. Prior to fire department arrival, a single occupant jumped from a second-story bedroom window with the assistance of a neighbor, the Department says.

According to Stony Hill VFC, crews found an active fire in a first-floor kitchen which was subsequently knocked down with a single hand line. The first floor suffered extensive smoke and fire damage. The second floor sustained smoke and heat damage. The single occupant was transported to Danbury Hospital for injuries consistent with smoke inhalation.

"The cause is under investigation by the Bethel Emergency Management & Fire Marshal office. Unfortunately, a pet rabbit perished in the fire. Thank you to Bethel Veterinary Hospital for your efforts," Stony Hill VFC says.