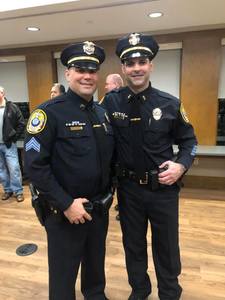 The Bethel Police Department is proud to announce and celebrate the promotions of  Lieutenant George Bryce Jr. and Sergeant Adam Cleary!

George Bryce, promoted to Lieutenant, was hired in 1999 and served as a patrol officer until 2004 when he became a School Resource Officer at the Bethel High School. In 2006, he transitioned to the position of Detective and specialized in both computer crimes and computer forensics. Following a promotion to Sergeant in 2014, he returned to patrol briefly before becoming the Detective Bureau Sergeant for the five years preceding his promotion.

Adam Cleary, promoted to Sergeant, was hired by Bethel Police Department in 2008. After serving five years on patrol, Sergeant Cleary became a Field Training Officer and was awarded the opportunity to become a K9 handler in 2013. Sergeant Cleary has been partnered with K9 Officer Bishop ever since.