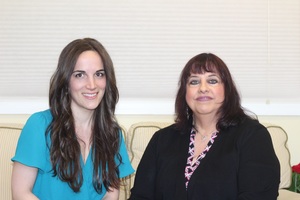 Support Connection, Inc. announces the selection of two local residents as Walk Ambassadors for their Annual Support-A-Walk which will take place on Sunday, October 6, 2019 (rain or shine) at FDR Park, Route 202, Yorktown Heights, NY. The Walk brings attention to the needs of people affected by breast and ovarian cancer and raises funds for Support Connection’s free counseling and other support services for those affected by these diseases. Walk Ambassadors are people who share their personal stories to illustrate the spirit and purpose of this uplifting annual event. In honor of the Walk’s 25th anniversary, this year’s Ambassadors were chosen because of their longtime participation in the event.

PAULA NATALE (Shrub Oak): Paula recently celebrated her 20-year anniversary as a breast cancer survivor. In 1999, when she learned of her diagnosis, she was understandably devastated and didn’t know where to turn. That’s why Paula is so grateful that friends told her about Support Connection. When Paula called the organization for the first time, she was surprised but pleased and comforted to hear the voice of a longtime friend: Support Connection’s Executive Director Katherine Quinn.

From that day forward, Paula knew Support Connection was there for her. She participated in support groups and met other women who understood what she was going through. As she recovered and began feeling better Paula became one of the organization’s most enthusiastic cheerleaders. Any time she meets anyone who is dealing with breast or ovarian cancer, in addition to offering them hope by sharing her experiences, Paula encourages them to reach out to Support Connection for the help she knows is waiting for them. She says “I tell women Support Connection will help them get through cancer, from start to finish. The people there are so warm and caring. They helped me get through all these years.”

Over the past 20 years, Paula and her family have attended numerous Support Connection events. They never miss the Support-A-Walk, walking with friends (including Paula's NY-Presbyterian Hudson Valley Hospital "family") who all believe in the cause. They’ve raised thousands of dollars altogether. Paula’s son, Steve Kollias, recently joined Support Connection’s Board of Directors. She couldn’t be more proud or more pleased.

Paula is honored to be a Walk Ambassador this year. She says: “I want to try to give back to help other people the way Support Connection helped me.” She encourages everyone to join her to see for themselves the power of support: “What strikes me the most is the thousands of people who show up for the Walk. It shows love, courage, and hope in all of these people’s faces.”

MELISSA FREDERICK (Cortlandt Manor): Melissa’s involvement with the Support-A-Walk began in 2007. Her mom, Maria DeMichele, had been diagnosed with advanced ovarian cancer three years earlier, so when they heard about the Walk, they gathered a group of family and friends to form a team “Maria’s Marauders.” The Walk was also Maria’s introduction to Support Connection; she was grateful to find a place where she could receive free counseling and other support services to help her cope with the impact cancer had on her life. As Melissa put it: “Support Connection gave my mom a feeling of empowerment and control over a situation where she had none. They were so knowledgeable and helpful; they reached out to her all the time and were like a second family.”

Melissa lost her mom to the disease in 2011 but Support Connection is still an important part of her life. She says “It’s a pretty incredible organization. Everyone there has played such a major role in support not only for my mom, but also for me and the rest of our family. Just knowing there’s someone to go to is so valuable.”

The team Melissa’s mom started continues to walk every year in her memory. In addition to numerous family members and friends, Melissa brings her three children who range in age from 18 months to six years. Melissa says it’s a very special day: “We come to the Walk and still feel like she’s walking with us. I think of my mom all the time, we all do, but at the Walk, we’re all thinking of her at the same time. It’s a feeling you don’t get anyplace else.”

As a Walk Ambassador Melissa encourages others to participate and raise funds: “It’s extraordinary to be part of something where everyone really understands what you’re going through or have been through - for the fighters, the families and friends. You’re surrounded by signs and shirts with pictures and team names honoring those who have fought against cancer. It’s truly empowering to know you never stand alone, you walk together.” She adds: “Support Connection helped my mom and our family tremendously. But it’s also so rewarding to raise funds for an organization that supports our entire community – maybe even your neighbor… co-worker… family member. That’s pretty special.”

To donate to the Support-A-Walk, or to learn how to participate or fundraise, visit supportconnection.org/support-a-walk or call 914-962-6402.