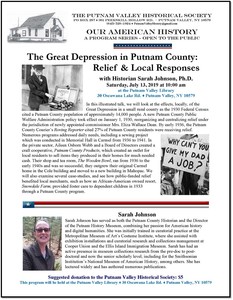 In this illustrated talk, we will look at the effects, locally, of the Great Depression in a small rural county as the 1930 Federal Census cited a Putnam County population of approximately 14,000 people. A new Putnam County Public Welfare Administration policy took effect on January 1, 1930, reorganizing and centralizing relief under the jurisdiction of newly appointed commissioner Mrs. Eliza Wallace Dean. By early 1936, the Putnam County Courier’s Roving Reporter cited 27% of Putnam County residents were receiving relief. Numerous programs addressed daily needs, including a sewing project which was conducted in Memorial Hall in Carmel from 1936 to 1941. In the private sector, Aileen Osborn Webb and a Board of Directors created a craft cooperative, Putnam County Products, which created an outlet for local residents to sell items they produced in their homes for much needed cash. Their shop and tea room, The Wooden Bowl, ran from 1936 to the early 1940s and was so successful, they outgrew their original Carmel home in the Cole building and moved to a new building in Mahopac. We will also examine several case-studies, and see how public-funded relief benefited local merchants, such as how an African-American owned resort, Snowdale Farm, provided foster care to dependent children in 1933 through a Putnam County program.

Sarah Johnson has served as both the Putnam County Historian and the Director of the Putnam History Museum, combining her passion for American history and digital humanities. She was initially trained in curatorial practice at the Metropolitan Museum of Art’s Costume Institute, where she assisted with exhibition installations and curatorial research and collections management at Cooper Union and the Ellis Island Immigration Museum. Sarah has had an active presence in museum collections research from the pre-doc to post-doctoral and now the senior scholarly level, including for the Smithsonian Institution’s National Museum of American History, among others. She has lectured widely and has authored numerous publications.