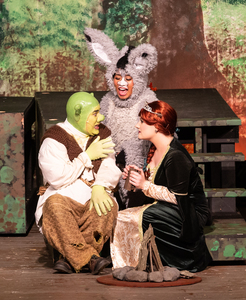 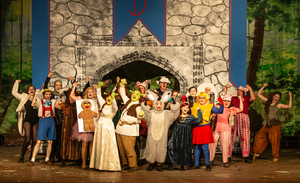 Shrek is one of those productions that is tailor made for summer breaks, creative artists, and community, and at Musicals at Richter in Danbury, it has made a happy, swampy home.

Many remember “Shrek!” as a 1990 picture book by writer and cartoonist William Steig, where typical folk tale components are given a sardonic rinse: the focus is firmly on the antihero who is feared and loathed by the townspeople--who represent the reader/audience--yet he finds he is perfectly content with himself, “warts and all,” and needs no transformation on his journey, not even for love. The moral is neither “be nice and nice things will happen to you,” nor is it “change yourself and people will like you.” Instead, it is more “your vibe attracts your tribe.” This credo carried into the Oscar-winning Dreamworks eponymous (minus the exclamation point) film, which went a step further by up-ending the antiquated princess tropes around helplessness and beauty concepts, and additionally acknowledging that animosity can be experienced by anyone considered different and viewed as a threat to the homogeneity of those in power, ogre or otherwise.

With a brassy score by Jeanine Tesori (“Thoroughly Modern Millie,” “Caroline, or Change,” “Fun Home”) and cheeky book and lyrics by playwright David Lindsay-Abaire (Kimberly Akimbo, Rabbit Hole, High Fidelity the Musical), Shrek echoes the intention of the film and further empowers characters of all stories to embrace their weirdness and enjoy their lives. This spirit is taken for a delightful spin as director Lindsay O’Neil assembles an enormous cast to deliver joy, laughter, and postmodern sass in a classic Broadway package. There are powerhouses at every turn, and even in an ensemble of all ages and experience levels, the most novice performers add to the sparkle of this show. A phenomenal pit, under the musical direction of Dan Koch and housed in a tent at the side of the audience, thoroughly delights in Tesori’s fairytale material and supports the singers uniformly (despite the periodic sound/audio glitches).

The open forest set designed by O’Neil and RJ Bogues perfectly coordinates with Richter’s outdoor audience space and is an ideal arena for a cadre of characters to craft a tale. As we open, Shrek’s parents (impeccably sung by Missy Slaymaker-Hanlon and the criminally under-acknowledged Daniel Satter, who brighten and lighten the action whenever they are on stage) is banished to live on his own on his seventh birthday, while the princess is sent to live in a tower by her parents (solidly sung by Robert Geils and Denise Milmerstadt), complete with a hideous curse that can only be lifted by the kiss of her true love, naturally, and guarded by a dragon, because that is the plot of all story princesses before her.

Soon, nearly every storybook character ever is squatting in Shrek’s swamp with woes of eviction from the ruling Lord Farquaad (Roger Grace, substantially tucking his towering torso into the finatical fop’s four-foot frame). A deal is made that if a marriageable princess is delivered to Lord Farquaad, he will allow the fairy tale characters to return to their homes and leave Shrek in peace in his stinky shelter.

From the beginning, Kevin Bielmeier shows he is more than adept at embodying the titular ogre, and maneuvers his customary swath and Scottish brogue with organic ease. A character that is descibed with such (delicious) lyrics as “when you are grotesque, life is Kafkaesque” paint Shrek as a tragic and ostracized curmudgeon, yet Bielmeier’s Shrek settles in his gooey green guts with affable humor and heroic hubris. In fact, the one thing the audience isn’t, is afraid of the stout fellow. He is a joy to watch and hear, particularly in “Who I’d Be,” and “When Words Fail.”

Shrek’s equitably outcast but desperately optimistic counterpart is the marvelous Princess Fiona. We meet three ages of the cursed ingenue in “I Know It’s Today”: the polished beyond her years Abigail Rivas as Young Fiona, the vocally vivacious Madison Beilmeier as Teen Fiona, working her strong alto until it lands with Emily Walsh as the adult Fiona, stretching her belt through this tricky song and fully harmonic with her two “selves” in a top notch trio.

As fairytales are big on trios (we meet the Three Bears, the Three Little Pigs, and Three Blind Mice among a forest of famous folktale friends), the “big three” are Shrek, Fiona, and a mysterious talking Donkey with the comedic sensibilities of Eddie Murphy who is among the evicted and additionally shunned withing the fairytale community. As a role, Donkey is the epitome of the wacky sidekick and given that he was written with specific Murphy DNA (many jokes, deliveries, and plot points were improvised by him in the 2001 film), is always in danger of being played as a one-dimensional mascot whose suit never quite fits. The blessing of the production is the perky and perfect Teah Renzi, who gives Donkey a sweet and sincere spin. She sings up the octave for songs originally nestled in Daniel Breaker’s Broadway baritone and nails every one of them. Her riff at the end of “Don’t Let Me Go” is sensational.

Before Shrek finally finds the fair Fiona, he must outwit, outlast, and not be out-barbecued by the guardian dragon, who is without the clunky puppet in this production and portrayed fabulously by Fiona Bryson. In addition to being a situational setup song, “Forever” serves as Dragon’s soulful vehicle to set her sites on Donkey as a romantic partner. Surrounded by cleverly choreographed Flames, Dragon and Donkey ignite the unconventional fires of romance. Manipulation, violence, and sexual aggression are not the healthiest beginning to a relationship, but that’s another story.

Regarding the FIames squad, praise to choreographer Lindsay T. Miller for all of the dances in this production. From Grace’s entrance as Farquaad’s (highlighted by an unintentional and hilarious train whistle), he is tasked with maintaining tall confidence in a short stature, shuffling tiny legs in a full company dance number. Extra credit to him for being able to speak after that number, let alone sing. Then, from the precise cuckoo-clockery of the Duloc ensemble, to the Temptations uniformity of the imprisoned knights, to the best darn tappers in the Pied Piper (stellar dance captain Viola Minor)’s Rat line, and colored throughout with solid elements of classic Broadway dance, Shrek’s choreography is a mini-master class.

In a play where fantasy is mandatory, fairy tale costumes may be, for lack of a better word, too costumey, a cheeky interpretation is most appreciated.  Costumes by Sarah Daleo are charming and cohesive, but especially fun when sidestepping the expected to tell a supplemental story: the Pigs with suitcases that correspond with their house materials; the attempted drag of the Big Bad Wolf, Dragon’s sequins scales, the Bears’ fur jackets, Pinocchio’s exquisite wood appendage detail (which may be a combination of costume and makeup).

A note about makeup in a show full of imaginary creatures: MAR has no indication of a makeup coordinator in the program, so while it took a bit more time than preferable for Fiona to green and de-greenify, accolades to whomever had any hand in creating the faces and features of the creatures in this production.

As we are mentioning our boy Pinocchio, strength to Weston Pytel for singing and acting through Pin’s heinous (mandatory) falsetto. In “Story of My Life,” we are given first glimpses of the immense talent that is generously sown through this show, startng with the glorious vocals of Sydney Gershon as the Ugly Duckling, Ella Zamek as the Elf, and Emma Lubber as Peter Pan. “Freak Flag” shoots more comets across the stage in brilliant solos: Daisy Stott has the vocal glamour of the Sugar Plum Fairy while puppeteering the Gingerbread Man (Gingy) on a sheet pan and alternating characters with hilarious pluck. She also has solid dramatic moments in the comedic “muffin man” exchange. Denise Milmerstadt then gets the big finish verse and polishes it with panache.

This production has the good fortune to have a cast that is willing and able to participate anywhere and as anything required and give it their presumed all as they deliver the multitude of visual gags and witty remarks flying through this play. The cast is rounded out by Dolly Conner, who  takes a scene as the Bishop, with no identified comedic bits or folklore, and performs with clarity, as well as  Rachel Koch, Brenda Schoenfeld and Steve Stott as the Three hilariously German Little Pigs, Kevin and Carolyn McCarthy as Big Bad Wolf (with one of the best lyrics regarding his dress) and Wicked Witch respectively, Ethan Berger as Farquaad’s lackey Thelonious, Rose Giardiello as Baby Bear, Donovan Koch as assorted short people, and dancers Domenic Burns and Michaela Milmerstadt.

Shrek the Musical continues to wave its freak flag at Musicals at Richter until August 10. Bring a picnic to enjoy when the grounds open at 7 PM before the 8 PM “curtain.” Audiences are encouraged to bring chairs and blankets for lawn seating, while a limited number of chairs are available free of charge at the concession area. Don’t forget your chosen method of bug repellent! (Thanks to Priscilla Squiers for lending me hers!)

Musicals at Richter is located at 100 Aunt Hack Road, Danbury, Connecticut. Call 203-748-6873, email  This email address is being protected from spambots. You need JavaScript enabled to view it. , or visit musicalsatrichter.org for more information.