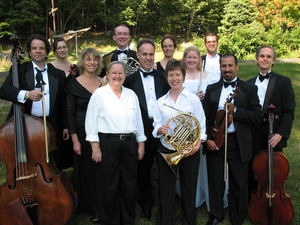 The Doansburg Chamber Ensemble will continue its 2019 season with performances by its Chamber Orchestra. The program will be performed on Saturday, August 31st  at 7 p.m. at St. Mary in the Highlands Episcopal Church at 1 Chestnut Street at the intersection of Routes 9D and 301 in Cold Spring, New York, and on Sunday, September 1st at 4 p.m. at Trinity Lutheran Church at 2103 Route 6, just west of Brewster, New York. The Ensemble will feature flutist, Christine Smith. Scheduled repertoire for this concert includes Symphony in C Major Z21 by V. Pichl, J.C. Arriaga's Symphony in D Major, W.A. Mozart's Flute Concerto No. 2 in D Major, and Symphony 74 in E flat Major by F.J. Haydn.

The Doansburg Chamber Ensemble consists of accomplished musicians who, along with several guest artists, annually present a concert series of outstanding musicianship in a charming, rural church setting. The artists have been heard at major performance venues around the world, including Carnegie Hall, the Saratoga Performing Arts Center, and Lincoln Center. Their artistic musicianship will please audiences of all ages. Miss Smith is a graduate of the Juilliard School of Music, Pre-College Division, and she holds a Masters Degree in Education. Her solo appearances have included performances for U.S. Forest Service personnel at the Harding Ice Field in Alaska.  She has performed at Grace Church in White Plains on their Noontime Series, as well as performing with the St. Peter’s Chamber Orchestra.  Christine is currently conductor of the Putnam Symphony Orchestra, and she is the conductor of a number of vocal ensembles.  Her principal teachers have been Alan Cox, Jeff Khamer, Samuel Baron, and Julius Baker.

Programming is made possible, in part, through the Putnam Arts Council's Arts Link Grant Program with public funds provided through the NY State Council on the Arts, with support from Governor Andrew M. Cuomo and the NY State Legislature.

Tickets for the concert are available at the door at $10 for general admission and $9 for seniors and students. For further concert information, or to order advance tickets, please call (845) 228-4167.