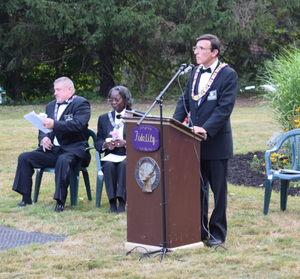 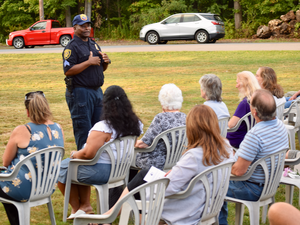 The Brewster Elks Lodge #2101 held a small but solemn remembrance ceremony for the victims of 9/11 at their lodge on Route 22 this past Wednesday evening.

NY State Assemblyman Kevin Byrne (94th Assembly District) was also in attendance and as he has done every year for the past few years, he gave a moving rendition of "Amazing Grace" on the bagpipes during the ceremony

Speakers at the event were Harrison Firefighter Joseph Maggulo, who was chief of the department at the time, and recently Retired New Rochelle Police Department Sergeant Calvin Mcgee. Both men spoke of what they were doing the night before and where they were when they heard the news of the attacks. Both men remembered digging on “the Pile” and how the country came together as one that day. Both men expressed the need for the country to regain that attitude and come together once again.