FREE Staged Reading - 6 Characters in Search of an Author 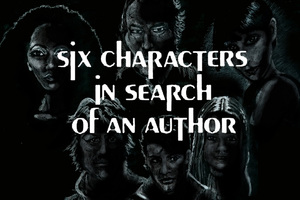 Join us for this FREE staged reading!  There will be a reception with food and drinks as well.  All donations in any amount towards the restoration of the Old Town Hall Theater will be cheerfully accepted.  RSVP HERE.

In 1921, Luigi Pirandello crafted a piece about the work we leave behind. As humans, we often dismiss our smaller ideas, believing they will never amount to anything. To most, especially those in the arts, these thoughts simply fade away into the unknown, but Pirandello presents a work with the intent of opening everyone's mind to what our ideas may have become. A piece about incomplete professional work, Six Characters in Search of an Author brings characters to life, and on a stage, where actual actors are baffled as to how these characters even came to exist. Pirandello presents a dramatic satire about his own unfinished work, making us question if the work we’ve  abandoned could actually have been the masterpiece we never produced. As the characters unfold their story to the actors on the stage, the audience gets a small taste of the struggles of an artist’s life, such as the difficulty of completing what you started. While the characters presented may never have actually come to fruition, Pirandello wants everyone to realize that their own works can indeed come to life, just like the characters on stage.

Richard Chad Frey, a passionate director, and actor with 12 years of experience has assembled a quintessential “Six Characters” crew.  These quintessential 6, guided by Richard, deliver a live theatre performance that leaves the audience doey eyed, in a reflective state of awe, looking inwards at the thoughts/feelings/work - they’d left behind.