'Funny How It Happens' Coming to Adelphi via a Virtual presentation 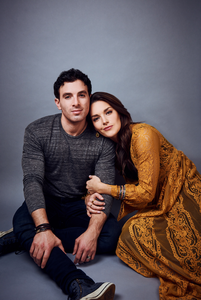 Tony-Award nominee Jarrod Spector and his wife, Kelli Barrett, will perform their hit show Funny How It Happens on the Westermann Stage of Adelphi University's Performing Arts Center (PAC) on Sunday, November 22, beginning at 5 p.m. The livestreamed show is a part of the Live From Adelphi Concert Series.

Funny How It Happens is an intimate look at the uncanny parallels and fortuitous make-it-or-break-it moments throughout the lives of the married couple's careers and friendship that eventually brought them together. It features pop favorites and iconic songs from their Broadway musicals while offering an inside (and often hilarious) scoop on what life is really like as a married Broadway "power couple."

Spector is best known for his Tony nominated performance as Barry Mann in Beautiful: the Carole King Musical. He played Frankie Valli for a record 1,500 performances in Broadway's Jersey Boys. He had his Great White Way debut at age 9 as 'Gavroche' in Les Misérable. He was last seen as the iconic 'Sonny Bono' in Broadway's The Cher Show.

Barrett originated the role of 'Lara Guishar' in Doctor Zhivago on Broadway and has had leading roles in other Broadway productions including Wicked, Baby It's You! And Royal Family. She was recently lauded for her portrayal of Liza Minnelli in the award-winning FX show Fosse/Verdon.

Admission is $20. For more information on the series and to purchase tickets, visit www.adelphi.edu/LiveFromAdelphi