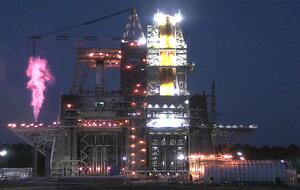 The hot fire is the eighth and final test of the Green Run series to ensure the core stage of the SLS rocket is ready to launch Artemis missions to the Moon, beginning with Artemis I. The core stage includes the liquid hydrogen tank and liquid oxygen tank, four RS-25 engines, and the computers, electronics, and avionics that serve as the “brains” of the rocket. During the test, engineers will power up all the core stage systems, load more than 700,000 gallons of cryogenic, or supercold, propellant into the tanks, and fire all four engines at the same time to simulate the stage’s operation during launch, generating 1.6 million pounds of thrust.

The first in a series of increasingly complex missions, Artemis I will test the SLS rocket and Orion spacecraft as an integrated system ahead of crewed flights to the Moon. Under the Artemis program, NASA is working to land the first woman and the next man on the Moon in 2024.

For more information about the Green Run test series, visit: