Artemis I Space Launch System being prepared for a dress rehearsal 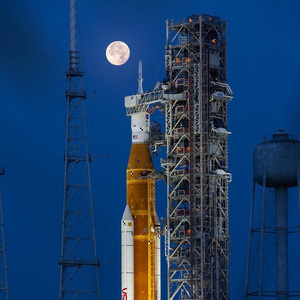 A full Moon is in view from Launch Complex 39B at NASA’s Kennedy Space Center in Florida on June 14, 2022.

The Artemis I Space Launch System (SLS) and Orion spacecraft, atop the mobile launcher, are being prepared for a wet dress rehearsal to practice timelines and procedures for launch.

The first in an increasingly complex series of missions, Artemis I will test SLS and Orion as an integrated system prior to crewed flights to the Moon. Through Artemis, NASA will land the first woman and first person of color on the lunar surface, paving the way for a long-term lunar presence and using the Moon as a steppingstone on the way to Mars.