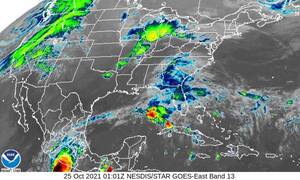 Local Officials and the Putnam County Bureau of Emergency Services are preparing to respond to 2 potentially hazardous weather events heading into the New York/New England Region this week.

“An early season tempest could bring a wind-driven, chilly rain to portions of the Northeast from Monday through Wednesday," AccuWeather meteorologist Randy Adkins has said, adding that flooding could be a significant concern across southern New England.

While severe thunderstorms will be confined in the Ohio and Tennessee River valleys, rain and showers will spread farther north ahead of the storm Monday and Monday night. By Tuesday, the storm will strengthen as it moves off the southern New England coast, bombarding residents with heavy rain and increasingly windy conditions.

According to Accuweather.com The nor'easter, which, simply put, is any large storm that brings northeasterly winds along the Atlantic coast of North America, according to the National Weather Service (NWS) definition, is expected to move up the New England coastline Monday night through Wednesday. Flooding downpours will set up from southern Maine to eastern New York in cities such as Boston and Worcester, Massachusetts, which are expected to pick up 4 inches to the AccuWeather Local Stormmax™ of 8 inches as the storm intensifies off the coast.

A second storm that is bringing heavy rain in several western states at this time, will move eastward near mid week and reach the east coast at the end of the week. This storm is expected to bring heavy rans and winds to the area Friday afternoon or evening.

The Putnam County Bureau of Emergency Services posted on their Facebook page Sunday evening that Putnam County is expected to receive rainfall in excess of 3 inches, between Monday night and Thursday morning. Wind gusts for our area are expected in the 20-30 mph range.