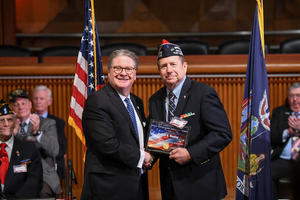 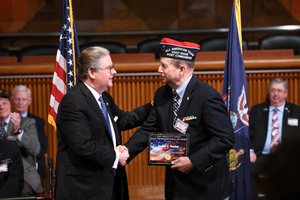 (Albany, NY) Senator Pete Harckham today honored Senate District 40 Veteran Arthur L. Hanley by having him inducted into the New York State Senate Veterans' Hall of Fame. The ceremony was held at the Legislative Office Building in Albany, where Hanley was inducted along with more than 60 other honorees representing senatorial districts throughout the state. Hanley, a lifelong resident of New York, currently residing in Brewster, served in the United States Army June 1969 to February 1972 in the Americal Division in Vietnam May 1970 to April 1971 as a Ground Sensor Operator with G2-Target Mission Force based in Chu Lai, RVN. For his service to our nation, he received the Bronze Star, Army Commendation Medal, Vietnam Service Medal, Vietnam Campaign Medal, New York State Conspicuous Service Cross and National Defense Medal.

Senator Pete Harckham said, “I’m proud to honor Art Hanley’s invaluable and highly decorated military service in Vietnam, as well as his decades of community service and business accomplishments, since his return. He typifies our heroic war veterans - selfless and always giving. His induction into the New York State Senate’s Veterans' Hall of Fame is well-deserved. I thank him for his service and his contributions to the community, and I thank his family for sharing him with the rest of us.”
Honoree Veteran Arthur L. Hanley said, “I am humbled and honored to be included in the New York State Senate Veterans' Hall of Fame, among people who I admire. To think that I am now one of them takes my breath away.”

Hanley, who owned and operated three successful small businesses, is currently employed by Putnam County as the Deputy Director of the Veterans Service Agency.  An Accredited Veteran Service Officer, Arthur assists his fellow Veterans and their dependents in filing claims with the Veterans Administration.

Hanley has always been very involved in the communities where he lives and works.  He is a 47-year member of the Katonah Fire Department in which he is a Past Captain and Past member of the Board of Directors, a Past President of the Katonah-Bedford Hills Volunteer Ambulance Corps, and a former member of Brewster Little League's Board of Directors, where he served as Treasurer. He’s also served as Past President of Lifeline, the parent support group for the Brewster High School NJROTC; been a member of the Brewster-Southeast Honor Roll Committee; and been a member of the committees which brought the Traveling Vietnam Wall to Putnam County in 2011, 2015 and 2018.

Hanley and his wife of 42 years, Pam, reside in Brewster.  They have two sons, Brian (Melissa) and Michael, and three grandchildren, Brendan, Sara and Avery.