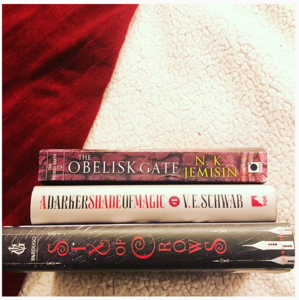 June was a gaudily enjoyable reading month for me, though also mentally draining (see Purgatorio below). I read the fewest books of any month so far this year (but not the fewest pages, which belongs to March), and most of them were big wins. I discovered a new favorite translation of The Odyssey and a new series I’m excited to continue. I rediscovered a medieval classic. And I finished N. K. Jemisin’s The Broken Earth trilogy. That was the sad part.

And now for those stats I so enjoy fussing over…

The Obelisk Gate and The Stone Sky (The Broken Earth Trilogy #2 and #3) by N. K. Jemisin

This series kept me riveted to the last word. Set in a world hammered by geological catastrophes, the second and third books in the series continue to build on the plot, doubling back in time and then roaring forward to a thrilling and tense conclusion. My one fear is that this series has set my fantasy bar impossibly high. The movement from one book to the next felt seamless. I’m glad I got to gulp it down rather than having to wait for each book. Then again, I’m not known for my patience, when it comes to books.

A Darker Shade of Magic by V. E. Schwab

I loved the concept of this book: four parallel Londons, each with its own problems, and only two magicians who can move among them. The execution was less satisfying for me than the concept itself. This was partly because of how irredeemably evil the baddies were. I prefer when authors make me question my loyalties and see the potential for good and evil in anyone. It existed in part, but not enough for my taste. Meanwhile, there was too much blood for my delicate sensibilities.

This poem consumed my May due to the work project for which I read it. At the risk of stating the obvious, Purgatorio is the second in Dante’s Divine Comedy, in which he travels through Purgatory with Roman poet Virgil as his guide. It’s all allegories and symbolism and hard, hard work for the reader to divine (ha) Dante’s meaning. This is intentional on Dante’s part, which makes the poem simultaneously exhausting and exhilarating. Also, its use of form is terrifyingly brilliant and left me in awe. Imagine, that’s via the translation.

Dante’s concept of Purgatory is intriguing: Rather than being Hell lite and with an end date, Purgatory is a journey to recover the communal self, which sin erodes. Sins, in this conception, are offenses against one’s neighbors rather than against God. So envy, for example, causes one to begrudge their neighbors success or happiness or fame, which also leads to bitterness and cruelty, which leads to social disintigration. The journey of repentance is painful, but for the penitents as Dante depicts them, it’s also joyful because they are restored to love. It’s deeply touching and affecting. But if politics is your bag, there’s plenty of that too, with much not-so-veiled lambasting of popes and kings ... and occasionally an acquaintance of whom Dante was evidently none too fond.

I have read so much nonfiction about the Romanovs and the Russian Revolution that I never expected to be drawn to a novelization of these events. What hooked me was not the story but the author’s dedication. It made me trust her to tread carefully and with respect, and she did not disappoint.

Brandes works with historical events but injects a magical element that enables Anastasia to survive the massacre in the cellar of the Ipatiev House. This is not a spoiler because history. Also the basic premise of the novel. But what I most valued about reading this novel was neither the history nor the fantasy. It was Anastasia’s struggle to conquer anger and achieve forgiveness that has stayed with me.

A Winter’s Promise (The Mirror Visitor #1) by Christelle Dabos, translated by Hildegarde Serle

I heard this series recommended for fans of Philip Pullman. As it happens, I’m not a fan of his, so I’d not bothered with this series. But I kept hearing it recommended and finally got curious.

It’s set in a world that has been torn apart. Literally: the earth has been fractured, and human communities exist far apart and within radically different organizational systems. Ophelia lives in a matriarchal society. She works in a museum, where she makes use of her special ability to read the history of objects that she touches. Her problems start when her marriage is arranged for a political alliance, and she is sent far from home to a country where nothing is what it seems. The plot was compelling enough, but what I most enjoyed were the mood, setting, unique use of magical elements, and the quiet strength of Ophelia.

I read this novel while also reading Dante. I needed the sanity escape. This first book in Bardugo’s duology brings together six … let’s call them misfits. Their unifying mission is a heist that, if successful, promises to change their lives. But first they have to survive. I liked it well enough, but I probably would have enjoyed it more if I hadn’t been tearing my hair out over Dante.

The Odyssey by Homer, translated by Barry B. Powell

I cannot express to you how much I enjoyed this verse translation. It is now my favorite translation that I have read. It is accessible without being labored and without sacrificing that Homeric strangeness—epithets, captivating but dissonant analogies, and circumspect characters that you never know as well as you’d wish to, as a modern reader raised on English language novels.

How was your June? Any recommendations?