What books are on your autumn TBR? 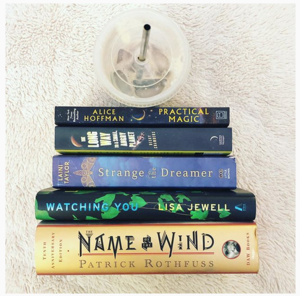 For someone who goes on and on about how I’m a mood reader whose reading whims can’t be pinned down, I did an outstanding job of reading the books I put on my summer to-be-read list (aka TBR). The only book on that list that I didn’t read in its entirety is a book of scholarship that I’m reading chapter-by-chapter as relevant.

As a result of this rousing success, and in honor of last Monday being the first day of autumn, I’m going to try this TBR thing again. I’ve already identified the new releases I want to read this autumn, so this list will be focused on the books already on my shelves.

I picked this up at one of Barnes and Noble’s 50 percent off sales...without knowing anything about it except that I read an Alice Hoffman novel about five years ago and enjoyed it. Apparently, the story is about two sisters who are from Massachusetts and are witches. Witches, a New England setting—these are two of my ideal ingredients for a witching-month read.

The Long Way to a Small Angry Planet by Becky Chambers

This science fiction novel, hailed as “the acclaimed modern science fiction masterpiece,” has been on my radar for a while, but I only just picked it up...recently (let’s not get into specifics as I’m supposed to be on a self-imposed book buying ban). It’s about a woman called Rosemary who is running from her past and joins the crew of an aging spaceship. The title came back into my mental landscape courtesy of this video by Tori Morrow. Her reading tastes and mine align on just about every book she has talked about that we have both read, so I’m confident I will enjoy this.

Strange the Dreamer by Laini Taylor

Here we have another fantasy novel that I’ve heard frequently discussed with fervor. Apparently, this is a reason to buy a book? All I know is that it’s the first of two that revolves around a young war orphan and junior librarian called Lazslo. Also, there is a blue goddess and a mythical city, Weep, that was cut off from the rest of the world 200 years earlier. The two words that grabbed me were "librarian" and "mythology."

Watching You by Lisa Jewell

This thriller is another Barnes and Noble 50-percent-off-sale impulse buy...despite the fact that I rarely read thrillers. It seems to be about a neighborhood whose residents are all hiding things from each other and spying on each other. I’m aiming to read this in October in honor of Halloween.

Name of the Wind by Patrick Rothfuss

So many fantasy readers I’ve spoken with have identified this as their favorite novel of all time. I’ve invested in a gorgeous hardback edition, so now I have to read it. The main character is a fellow called Kvothe who narrates his story and who, on the book’s first page, seems quite pleased with himself. Other than that, all I know is that this epic fantasy has been praised to the high heavens by critics and readers.

Have you read any of these books? Any you recommend I start with? What books are on your autumn TBR?