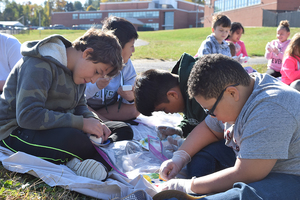 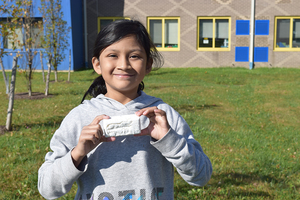 Inspired by a book they recently read, fourth graders at CV Starr gathered outside with bars of soap, toothpicks and paper clips. Their mission was to whittle a tiger into the bar of soap, similar to the whittling of wood the main character did in Kate DiCamillo’s novel, The Tiger Rising.

“The main character, Rob, whittles into wood,” explained Elena, one of the fourth graders in Danielle Recine’s class. “We’re whittling into soap because it’s safer.”

“Rob had a hard time allowing his feelings to rise up,” Recine said to the class. “When he whittled, it made him feel a lot better. Maybe this will be a calming technique for you too.”

Students were excited to connect with the character in a new way. They sat in clusters in a sunny patch of grass, each with their own bar of soap and a paper stencil of a tiger. Using paper clips, toothpicks, and skewers, the students slowly but surely dug into the soap to carve out tigers.

“The deeper you go, the better it will look,” Recine reminded them. “It’s going to take patience for sure.”

The activity was definitely an exercise in perseverance. Some students took to it, quietly shaving bits of soap away until a tiger emerged. Others became frustrated as they realized whittling wasn’t as easy as it sounded. Classmates stepped in though, showing those who were struggling techniques that worked for them.

“The special trick is to do the body shape first, then go onto the head,” Logan Saldicco explained. “I’ve never done this before, but I think it looks good. I’m actually going to add something extra.”

Saldicco was one of the students who took time away from his own whittling to give others pointers.

“It’s fun,” he said. “I like helping. It feels good because helping is good.”