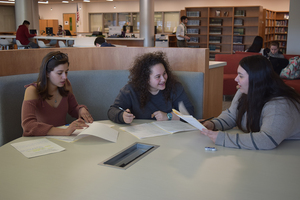 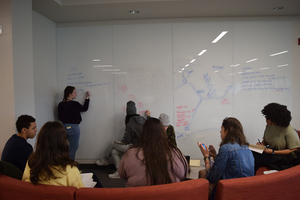 “Have you ever built a nuclear reactor?” Stone faced and pen ready to jot down notes, a Brewster High School senior waited for her classmate’s reply.

The questioning was part of an elaborate mock interrogation in Kayla Corvino’s Government class. Corvino created the simulation — which is like a big, weeks-long scavenger hunt meets Clue adventure.

“I used to teach a US Foreign Policy course and the students were talking about simulations and Model UN and how they would like to have that experience in the classroom — more simulations, more game theory,” Corvino said.

Corvino, a Brewster High School alum, tapped into that conversation — and her creativity — to create a high stakes game centering on the fictional nation of Erehwon (“nowhere” spelled backwards). Students were divided into groups: 8 Erehwon citizens who could be interrogated, 1 president who could not be interrogated, and 10 members of United States intelligence agencies who could do the interrogations.

“Every Erehwon citizen has a background, a life story. Then they’re given some secret information,” Corvino said. “The US intelligence agencies have to figure out who they’re allowed to interrogate based on real rules for intelligence agencies. At the end of the simulation, both sides synthesize the information and have to decide whether or not Erehwon has nuclear energy or nuclear weapons and what they plan on doing with those nuclear weapons.”

To make things even more interesting, “classified” information is slowly divulged to students across the school, with clues coming from staff members over a span of several days. Corvino leaked the information via the Remind app, which led students to different staff members who had students perform an activity to earn the clue.

To prepare for the simulation, students researched US government intelligence agencies and the processes they use to gather information. Throughout, they explored how the questions asked influence the information gathered, how government action is based on acquired intelligence and the role competing interests, power, personalities, and fear play in the whole process.

It is not an easy process.

“Students feel a lot of frustration in the beginning because it’s not being handed to them. They have to think,” said Corvino. “But it builds grit … eventually, they have those ah ha moments. Then they get nervous: Am I making the right decision? I know this is a game, but if I was in this intelligence agency, my wrong decision could start a war. We bring in a lot of current events and understanding what’s going on in the real world in this simulation.”

Throughout the simulation, students end up learning a lot about themselves too.

“Am I a leader? Am I a follower? Also, Am I able to do this? Am I able to step out of my comfort zone and ask kids questions,” Corvino said.

The simulation, which was a labor of love for Corvino and took about 60 hours to create, also touched on many of the skills highlighted in the district’s Strategic Coherence Plan including communication and collaboration, critical thinking, adaptability and perseverance.