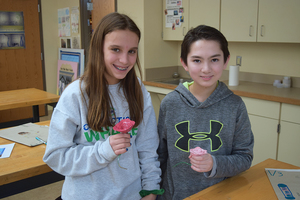 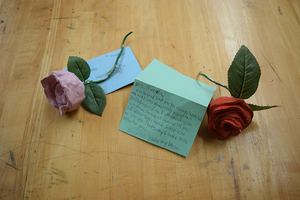 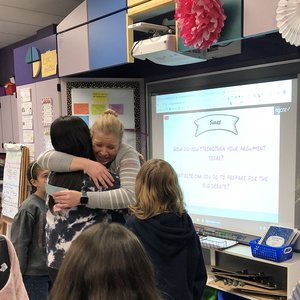 “They were on the verge of crying,” sixth grader Delilah said of the CV Starr teachers who received the roses. Classmates echoed her sentiments, seeming touched by the teachers’ responses.

Fourth grade teacher Danielle Recine was one of the lucky recipients.

“My class was quietly reading and I was working with individual students,” she said. “When I glanced at the doorway, I was surprised to see a group of middle schoolers — including the very familiar faces of students who were in my fourth grade ELA class. One particular student smiled and handed me a rose with the most beautifully written thank you note. It brought tears to my eyes that she thought of me as her hero. Certainly a gesture I won’t soon forget!”

“My heart melted when I opened the door and saw Jackson standing there with a handmade rose for me,” she said. “His words were equally as beautiful. I felt proud and honored to be given such a thoughtful gift. It reminded me of the power we have as teachers and the responsibility we have to inspire students to be their best self.”

Leading up to the gift giving, students learned about clay. According to Jimmy, a student in the class, they rolled the clay out really thin before forming the buds. The buds were then fired in the kiln before students painted them with acrylic paint and Mod Podge.

“When we heated them up in the kiln again, they became clear and shiny,” he explained. “Then we made little notes for the people we were giving them to, explaining why they’re our heroes.”

Jimmy gave a rose to his dad, a policeman.

“They made more than one rose,” Othmer explained. “Most of them took a rose home to someone in their family. But then they had to give one to someone in the community. That’s a little less comfortable. They immediately came up with CV Starr teachers because they left such a lasting impression on them.”

The lesson was one that both the students and teachers won’t soon forget.

“It was a very simple gesture but I think it went a long way,” Othmer said.