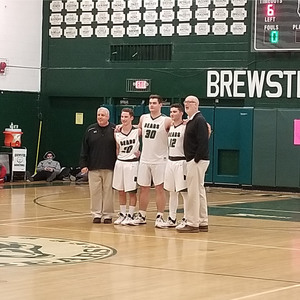 All three seniors scored throughout the game (Paul Catalano had three points. Nick Girard had ten, Zach Salvo had two) and they all received proper sendoffs.

Besides these moments, the Bears hosted the Walter Panas Panthers and lost by a score of 67-41.

This was another one of those games where the Bears were defeated by rapid ball movement and a wide group of threes. Another issue that arose during the game was their rebounding as it always seemed that a Panther was finding a way to get the ball and pass it out for another chance or a putback layup.
On top of these issues at defense, the Bears shot thirty-three percent from the field throughout the game, which didn’t help as Panas scored in double digits for all four quarters of the game.

Other scorers for Brewster included:

The Bears end the year with a 4-16 record under coach Tom Nelligan.