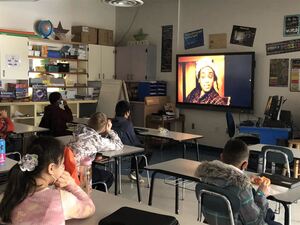 Fifth graders at CV Starr Intermediate School sat quietly in their classrooms, eyes glued to a recording of the play “Harriet Tubman and the Underground Railroad.” They were so engrossed in the performance, fifth grade teacher Amy Butera said that you could hear a pin drop. Students watched the 50-minute play as part of their celebration of Black History Month.

“The play is part of the Arts in Education Program through Ridgefield Playhouse,” said Butera. “It's a video of a live performance and, although we can't actually go to the theater, students watched it ‘movie-style’ on their classroom smartboards.”

The play also connected to fourth and fifth grade curriculum, which investigates the role of the African slave trade in early American history and takes a look at powerful leaders in the Western Hemisphere and their influence on people's rights and freedom.

“The play became a springboard for a deep conversation afterward,” Butera said. “Students made connections to examples of racism today and discussed the amazing courage, bravery and selflessness of Harriet Tubman and her importance as a role model.”

Students learned quite a bit about Tubman including that she became a spy for the United States government, that she couldn’t read or write and that an injury she sustained from a beating left her narcoleptic.

They enjoyed that the play positioned Tubman’s life as a story within a story, a framework they found engaging. The premise of the play is that someone is writing a book about Tubman’s life. It weaves back and forth between scenes from Tubman’s life and someone who is trying to tell her story.

“The sets, lighting, rich dialogue and songs were both entertaining and informative — perfect for our fifth graders,” Butera said.

Afterward, students were adamant about Tubman’s importance in history.

“She played an important role in Black history,” said Alana.

This engaging cultural experience was made possible by the PTA, which fully sponsored the event.