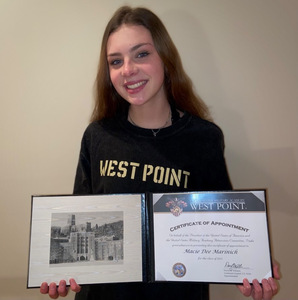 After a rigorous application process that included nominations from Senator Kirsten Gillibrand and Representative Sean Patrick Maloney following interviews with each of their selection committees, Macie Marinich is headed to the United States Military Academy at West Point in the fall.

Macie, who has been very active member of the Brewster High School community, answered a few questions for us on what brought her to this point and what he future holds.

What was your initial reaction when you learned you were accepted?

I was definitely excited, but I was calmer than I expected. It was almost as though after all of the anticipation, hard work, and waiting, I was finally able to take a breath and relax.

The application process was challenging, because I needed to pass a physical exam, get a nomination from a New York State senator, and also take the regular college application steps, so it was truly a feeling of relief to know that all of the work I had put in had finally paid off.

More than anything, though, I was grateful to have been accepted. My parents, teachers, and friends were always there for me throughout the application process, and I felt so thankful for all of their support.

What made you want to go to West Point?

I was first motivated to consider a career in the military when I began watching military movies a few years ago. They always reflected the unity, companionship, and connectedness present in the bonds between those serving in the military, and it was something that I wanted to experience. I knew early on that serving the United States in some way was what I wanted to spend my life doing. I also knew that I wanted a college education after high school because I am passionate about learning and I realized that West Point would give me a great balance between these two things. West Point also strongly encourages the value of duty, integrity, and honor, which are traits that I hope to live by throughout my life.

Are you involved in any clubs, sports or community groups?

Throughout high school, I fell in love with a lot of different clubs and activities at Brewster. I was a member of three sports teams at Brewster High School: Volleyball, Ski Team, and Track & Field, all of which were amazing experiences. I had great teammates and coaches who were always positive and uplifting. Sports became a way for me to relieve any stress from academics, which helped me stay focused throughout high school and developed my love for being active.

I was also a member of Model UN, which helped with my public speaking and critical thinking skills, and sparked my love for international affairs.

I played the drums in the Marching Band as well, and I especially loved playing at football games on Fridays.

What do you hope to study?

I am planning to major in International Affairs and Defense & Strategic Studies because I have always been very interested in what is going on in the world around us. The military plays an important role in relations internationally, so I'm hoping to become a part of that when I graduate.

Do you have a favorite class and/or teacher?

All of my teachers were amazing, and I would have a long list if I tried to name everyone who affected my life along the way, but Mr. (Larry) Maggiotto, Mr. (Tom) Mullane, and my ski coach, Mr. (Michael) Bellucci, were all really influential throughout my time at BHS.

I had Mr. Maggiotto as a math teacher for three years of high school, and he is so passionate about math that it is contagious, so his classes were always very engaging.

I had Mr. Mullane as a teacher for two years, and he was also the advisor of Model UN for my three years in the club. He knows so much about history, especially little fun facts, so his classes played a large role in developing my interest in social studies.

Mr. Bellucci was my coach on the Varsity Ski Team for six years and he has always been an encouraging and supportive coach for all of the athletes on the team.

Do you have a favorite school-related memory?

My favorite school-related memory would probably be one of the Model UN trips to Washington D.C. We spent a lot of time in committee sessions, working with other delegates and writing papers, but we were also able to tour the city and see the national monuments in our free time. I was lucky enough to meet people from all over the world and collaborate with them in committee, and I am still friends with some of them today. The trips really resonated with me because of the people involved in Model UN and the close-knit bonds we formed while away at these conferences.

Do you have any advice for other students?

My best advice for other students would be to stay busy, but stay organized. I found that the more activities, sports, or difficult academic classes that I was in, the less time I had to procrastinate or waste time. It was helpful for me to have a specific scheduled time for sports practices, schoolwork, and even relaxing. Once you get into a routine, it becomes easier to repeat the same good habits every day and I found that I was most productive when I developed good habits like these. I also made my bed every morning, and though it sounds trivial, I think it started my days off in the right way.

Where do you see yourself in ten years?

In 10 years, I'm not certain where I'll be. However, I do know that I want to be serving the United States in some way. I am hoping that in my years at West Point, I will figure out exactly how I can do that best.