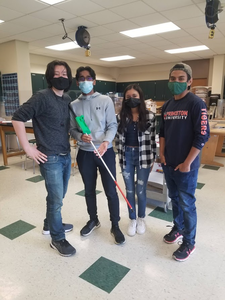 Brewster High School’s CyBearBots were recently named one of 20 finalists worldwide in the FIRST®Innovation Challenge presented by Qualcomm Incorporated. Out of 883 teams that submitted proposals and 116 semifinalists, the CyBearBots rose to the top with their invention: the Way-to-Go Cane.

Teams participating in the challenge were tasked with developing a product or device that encourages people and communities to become more active and that can improve mental and/or physical health. They had to create a business model, pitch the idea and use technology as part of their process.

“CyBearBots #7504, from Brewster, N.Y. was selected from entries from around the world for its outstanding solution that demonstrated sound and innovative design, feasibility, and the potential to have significant impact in the world,” FIRST said in a written statement.

The team started out with eight or nine different ideas for products but ultimately settled on an attachment to a white cane for visually impaired people that features an ultrasonic sensor.

“Our team was inspired to go with the Way-to-Go Cane over other ideas we came up with because of the greater impact a guiding cane would have for those who struggle with movement,” team member Riya Gupta said. “Some benefits that immediately came to mind when we brainstormed the product include more stability, productivity, and opportunities to become more active.”

Students reached out to Sadi Taylor (also known as Sadi the Blind Lady), a blind TikTok creator, for guidance in creating their product.

“Sadi talks about what it’s like to be a blind person and how you operate in the world,” said mentor Shannon Riley. “They reached out to her and asked her questions and, from there, they were able to refine their idea.”

Students learned that it would be helpful to have the ability to sense objects above the waist and to have a panic button that can use your phone to call 911 in case of an emergency. This information fueled their ideas.

“What they learned is that the white cane only detects what is down on the ground,” mentor Donna Schneider said. “But what if you’re bumping into tree branches? This invention will give users a better sense of the radius around them.”

The Way-To-Go Cane is lightweight and adaptable but gives users crucial information that their white cane alone cannot.

“Their product sits on the cane,” Riley explained. “There’s a sensor that can read everything that’s in front of the person and, as they’re using the cane, it detects objects at waist level. It takes and converts that information into vibrational feedback so that users know if they’re coming up on an object.”

Students learned a lot throughout the process. For Riya, it has been a great lesson in the power of perseverance.

“During the first stage of the competition, I was uncertain whether our team would make it to the next round because the purpose and approach of our cane was a bit underdeveloped,” she said. “Despite this, our team passed the first round — which surprised most of us. Since then, we have worked harder and harder to reach the point we are at now, which shows that if you continue to put in the extra effort to get past challenges, it will be worth it in the end.”

The team’s journey has certainly not been without its obstacles. Students started out working on the challenge virtually, which was not easy. It is also the team’s first year participating in the challenge, which brings with it a degree of uncertainty.

“This is the first time they have ever done the innovation challenge as a team, so they didn’t really know what to expect from it,” said mentor Dr. Brittany Kozlenko. “If they had seen or been involved in it in previous years, they would have a better idea of what to expect.”

It was the first year the team’s mentors took part as well. Each brought a different perspective to the table. Dr. Kozlenko is a physics teacher who brought the robotics program to Brewster High School. Riley is an art teacher who wants to bring a creative approach to robotics. Most of Schneider’s work districtwide is with special education students. She also has a strong technology background. Students additionally had help from an outside mentor, Steve Gallo, an engineer with Collins Aerospace.

“We all have a strength that we bring to the table,” Schneider said. “No one here says ‘I’m the leader.’ We just take a piece and we go with it. Together, it just melded nicely. We all still want to learn.”

Riya says the team owes tremendous gratitude to its mentors.

“We would not be where we are in the competition without them and their guidance,” she said.

The team is set to join other finalists on June 28 – 30 to attend virtual workshops, showcase their invention, and present to industry leaders and expert judges.