Frank Bonner, 'WKRP in Cincinnati' Star Has Passed Away. 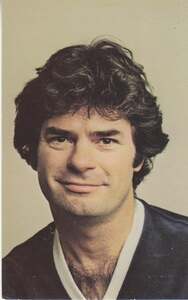 Frank Bonner, famous for playing Herb Tarlek on the TV sitcom "WKRP in Cincinnati"' has died. His family confirmed his passing to TMZ.

Mr. Bonner passed away Wednesday in Laguna Niguel, California as a result of complications from Lewy body dementia according to the family.

As an actor, Frank Bonner was best known for his work on "WKRP in Cincinnati", playing Herb Tarlek, the flashy clothes wearing radio station sales manager who could never land the big account OR the station secretary, Jennifer Marlowe (Loni Anderson).

He directed several episodes of “WKRP” and starred in the 1990s spinoff "The New WKRP in Cincinnati”. He also acted and directed in "Saved By The Bell: The New Class."

While "WKRP" never had stellar ratings it became an unexpected success in syndication. For the next decade, it was one of the most popular sitcoms in syndication, outperforming many programs that had been more successful in prime time.

“WKRP” ran from 1978 to 1982 and is best remembered for the classic Thanksgiving episode (which aired on October 30, 1978, the show's first season) in which Les Nesman (Richard Sanders), the stations newsman and the station's manager Arthur Carlson (Gordon Jump), threw live turkeys out of a helicopter in a station promotional stunt but didn’t realize turkeys couldn’t fly until after they saw them plummeting to the ground. The stunt caused an uproar in the city (on TV) and is still considered a classic sitcom episode by many. In 1997 TV Guide ranked this episode at number 40 on its "100 Greatest Episodes of All Time' list." Bonner appeared in 88 of the sitcom's 90 episodes in it's 4 year run.

He appeared as a guest star in an episode of the sitcom Night Court in the 1980s and from 1988 to 1990, he played the role of Father Hargis, headmaster of the fictional St. Augustine's Academy, on the TV show Just the Ten of Us,.

Mr. Bonner's loved ones are heartbroken at his death and were with him when he passed away peacefully on Wednesday, according to TMZ.

He was born Frank Woodrow Boers Jr, on February 28, 1942 in Little Rock, Arkansas.