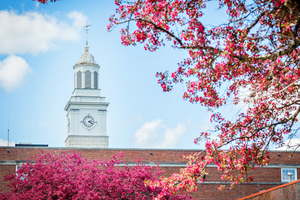 The State University of New York at Potsdam recently named 967 students to the President's List, in recognition of their academic excellence in the Spring 2021 semester. The SUNY Potsdam students were honored for earning top marks by President Kristin G. Esterberg.

To achieve the honor of being on the President's List, each student must have satisfactorily completed 12 numerically-graded semester hours, with a grade point average of 3.5 or higher.

Founded in 1816, The State University of New York at Potsdam is one of America's first 50 colleges -- and the oldest institution within SUNY. Now in its third century, SUNY Potsdam is distinguished by a legacy of pioneering programs and educational excellence. The College currently enrolls approximately 3,600 undergraduate and graduate students. Home to the world-renowned Crane School of Music, SUNY Potsdam is known for its challenging liberal arts and sciences core, distinction in teacher training and culture of creativity. To learn more, visit http://www.potsdam.edu.