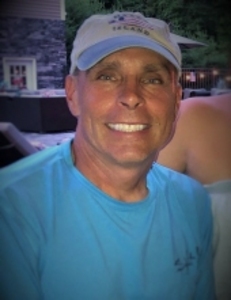 Born on October 26, 1966 at Putnam Hospital in Carmel, NY, the son of William B. Sr. and Nancy (Griffiths) Henry. Bill, as we all knew him, was a lifelong resident and graduate of Brewster High School Class of 1985.

After graduating, Bill went on to work at Raichle in Brewster, then joined the Teamsters Local #456, and worked for his father-in-law’s company, Serman Construction Inc.

After a seven year courtship, Bill married his high school sweetheart and the love of his life, Kimberly A. Serman at St. Lawrence O’Toole Church in Brewster, NY on September 28, 1991. They then went on to begin their own endeavor, Bill Henry Tree Service, Inc, serving Putnam, Dutchess & Northern Westchester for over 30 years.

Bill had many passions including traveling, boating, water-skiing, and deep-sea fishing in Florida. But above all, he loved being able to spend time with his family and friends eating, laughing, and wise-cracking. Helping others was very important to him and in continuing with that selfless role, he was also an organ/tissue donor. We hope he can reach as many people as possible in that great cause. He always said he was no great golfer, but he always enjoyed participating and donating to the many golf outings and other fundraisers in the area.

He shared his wisdom, dedication, and spirit to mentor many young people within the community, including his son, Matthew. Each of them appreciated the work ethic he instilled, which continues to guide them in all of their future endeavors. His long time employees have been faithful, honest, hard working men that Bill enjoyed working alongside every single day.

Bill could always be seen with a twinkle in his eye, wearing a bright smile, and waving happily as he drove by in his distinctively clean and shiny red trucks through the town. These greetings will be greatly missed by the entire community. His loss will be felt most deeply by his loved ones. He leaves behind his wife Kimberly, and children Nichole Henry of Boston, MA, and Matthew Henry, of Brewster, NY; his parents, Bill Sr. and Nancy Henry of Brookfield CT; his sister, Patricia (Michael) McManus of Brookfield, CT; his brother Michael and (Lisa Kappes) Henry; his two sisters-in-law, Victoria (John) Piazza of Brewster, NY and Jessica (Robert) Vrabel of Somers, NY, as well as his ten nieces and nephews.

In lieu of flowers, please consider donating through the Go Fund Me page begun by the class of 1985 at GoFundMe or Beecher’s Funeral Home website. Additional arrangements are being prepared to set up an annual scholarship fund created in Bill Henry’s honor through The Brewster Education Foundation. Condolences may be left for the family at BeecherFuneralHome.com