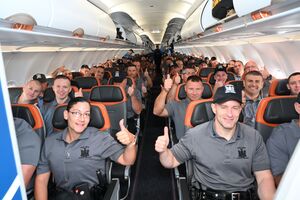 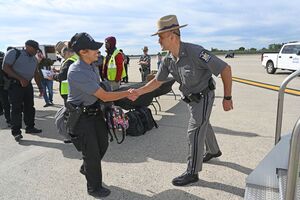 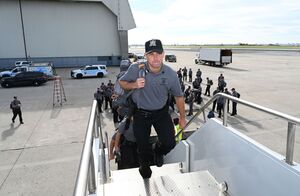 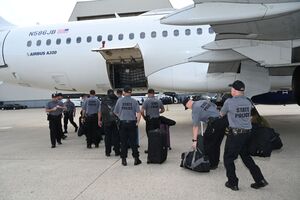 State Police Superintendent Kevin P. Bruen and Commissioner Jackie Bray of the Division of Homeland Security and Emergency Services today announced that a contingent of 50 State Troopers left this morning for Puerto Rico to help the island nation as it recovers from the devastation left behind in the wake of Hurricane Fiona.

The first wave of 50 Troopers, along with 69 New Jersey State Troopers, flew out of JFK airport at about 10 a.m. this morning bound for Luis Munoz Marin International Airport in San Juan, Puerto Rico. The flight was donated by Jet Blue Airlines.

State Police Superintendent Kevin P. Bruen said, “New York State Troopers have always answered the call for assistance wherever it’s needed, from Louisiana in the wake of Hurricane Katrina, to our first assistance mission in Puerto Rico following Hurricane Maria. Our Troopers will be on the ground assisting our partners with the Puerto Rico Police Department with public safety and recovery efforts as long as necessary.”

Division of Homeland Security and Emergency Services Commissioner Jackie Bray said, “We are grateful to the team of State Troopers deploying to Puerto Rico to help keep the public safe in the aftermath of Hurricane Fiona. As New Yorkers, we are always available to support others in their times of need. DHSES and our state agency partners stand ready to assist with additional requests, as we are committed to helping Puerto Rico recover from the devastating impacts of this hurricane.”

"As New York’s hometown airline and the largest air carrieer in Puerto Rico, we are pleased to fly state troopers from New York and New Jersey to San Juan so they may provide much needed assistance on the island," said Joanna Geraghty, president and cheif operating officer of JetBlue. "Working with our government and our other partners in New York and Puerto Rico, we will conitnue to provide support to our crew members, customers, and the community.

The 50 NYS Troopers that departed this morning will be assisting the Puerto Rico Police Department with traffic control and other law enforcement missions as needed, primarily in Aguadilla and Arecibo. A second group of 50 Troopers will also be deployed in the coming weeks.

On behalf of the New Jersey State Police, the New York State Police would like to thank Jet Blue for the donation of their plane and flight crew for this mission.