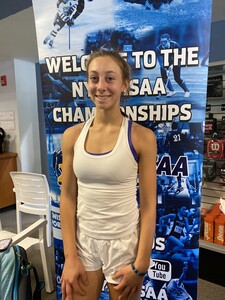 Mia Palladino is a tennis wunderkind. A nationally ranked tennis player, seventh in New York, she finished third most recently at the New York State Tennis Championships, and has been recruited to play for a Division 1 school. She’s also tough as nails.

Palladino is perfectly suited for tennis because she likes to be in control. “I definitely like being able to strategize myself, make my own decisions, figure things out on my own.” And she happens to come from a tennis family. Like many top players–Andre Agassi, Maria Sharapova–Mia has a father who excelled in the sport, a 4.0 NTRP ranked USTA player. From the time she was little, Palladino’s dad has been her coach. The big moment came about two years ago, when she finally beat him.

Palladino’s dad taught her how to slice a backhand and ace her serve, but he also taught her about tennis culture and good sportsmanship. His role models became hers.

“My dad told me stories of how Rafael Nadal trained rigorously and always kept his cool on the court. I don’t get angry on the court. You see a lot of bad sportsmanship out there. I try to keep calm and collected.”

Palladino is also inspired by Danielle Collins, who was a top ranked college player at University of Virginia and is now a top ranked professional player.

When a Brewster athlete or team makes it to States, the community has a special tradition: a Parade of Champions. When Palladino was sent off–the students at Brewster High School lined the halls cheering her on as drummers from the band kept the beat. Bum-ba-bum-ba-bum. Palladino and her teammates, followed by the Brewster Bear mascot, walked around the school–receiving shouts of encouragement and high fives. They all walked over to JFK elementary school where kindergartners, first graders and second graders had made signs “Go Mia!” “Mia You are Our Champion!”

Palladino, who has been a student in Brewster since the start, remembers when she was in eighth grade and the lacrosse team made it to States. There was a Parade of Champions for the team, “To have the community come together for a parade for me going to States is so cool.”

The New York State Championships were held in Schenectady from October 27th-29th.  There were 32 players from across the state in the singles draw, and the top three players from each Section competed at States.

As a senior, Palladino was excited and more relaxed than she was last year. Since it was her last run, she just wanted to play her best and have fun. The first two rounds of States weren’t tough. But the third round against Nina Wiese from Garden City was a really mentally and physically draining match. Palladino said, “Nina was good. I had to stay focused and calm to make sure I won.”

Palladino won, 7-5, 7-6 to advance to the semifinals but by the end, was spent. She only had an hour before the second match of the day–the semifinals. To recharge, she did what she usually does: yoga.

In the semifinals, Palladino and her opponent Victoria Matos split sets, it was so close–there were more than five match points– and it could have gone either way. The match was three hours long.

Palladino said, “I was disappointed to lose, but she is a great player."

Palladino was of course helped by her Brewster varsity teammates and her coaches: her dad, her coaches Greg Anderson and Angus Thompson from Armonk Tennis Academy, and her high school tennis coach, Rob McCullum.

Of her future, “I can't wait to play with other Division 1 players. I am excited that I am going to be with the team every day, practice, condition, travel, and play top D1 schools on the East Coast–just the idea of being on a team with great players and doing it all together is exciting.”