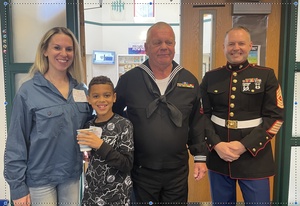 It was a full house as students at C.V. Starr Intermediate School celebrated Veterans Day.

An assembly featuring music, song and speeches honored veterans in the community as well as those in students’ families, all of whom were invited to attend.

“Veterans Day is a time for us to pay our respect to those who have served our country,” said Assistant Principal Paul Stellacci. “We celebrate and honor America’s veterans for their patriotism, love of country and willingness to serve and sacrifice for the common good.”

Fifth grader Silas Di Carlo opened the program by leading the group in the Pledge of Allegiance. The Chorus, made up of students from Pamela Clapes’ and Jazmin Pryce’s fourth grade classes, sang “This Land Is Your Land,” accompanied by Jorge Inga on the guitar. Later, the band led by Terence Nolan and the orchestra led by Robert Davies, played “My Country Tis’ of Thee” and “America the Beautiful.”

An active member of the US Marine Corps who served in Iraq, David Keith spoke about the importance of service. He said that service is doing “anything that can make your country a better place like being a teacher or police officer or doing volunteer work in your community.” Keith is the father of students, Emmit and Warren Keith.

A rousing “Recognition of Veterans” came next with the reading of the names of the roughly 25 veterans in attendance and the near 70 more Brewster veterans not in attendance. The oldest was an ancestor of C.V. Starr student Rene Hofle, Col. John A. West, who served in the Revolutionary War. Other honorees, all of whom had family connections to C.V. Starr students and staff, served in World War I, World War II, the Korean War, Vietnam and the Middle East.

Joseph Kutch, grandfather to fifth grader Ryan Pangis and fourth grader Dylan Pangis, and a veteran of the Vietnam War, said “My grandkids asked me to come and I think it is important to remember the veterans and to give back to society, not just with military service, but however you can give back.”

Fourth-grader Gabrielle Asanta, who played viola for the assembly, said, “I wanted to play for the veterans to say thank you for serving our country.”