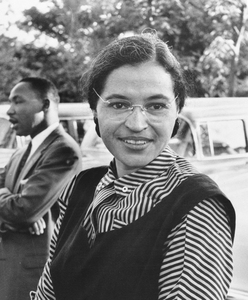 On December 1, 1955, after a long Thursday at work, Rosa Parks boarded a bus in Montgomery, Alabama. She took her seat in the ‘colored’ section. As she rode the Cleveland Avenue bus home, the bus began to fill.

When the bus driver asked Parks to give up her seat, she refused. Police arrested her, and what followed is Civil Rights history. On December 5, 1955, the courts found Parks guilty of violating the city ordinance and fined her $10 plus a court fee.

You can also visit the Rosa Parks Museum at Troy University. Use #RosaParksDay to post on social media.

The California State Legislature created Rosa Parks Day and first celebrated February 4, 2000. California chose to recognize the date of Rosa Park’s birth. Ohio and Oregon celebrate on the date of her arrest, December 1.